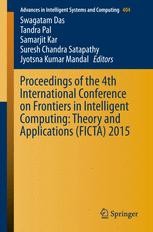 Proceedings of the 4th International Conference on Frontiers in Intelligent Computing: Theory and Applications (FICTA) 2015

The proceedings of the 4th International Conference on Frontiers in Intelligent Computing: Theory and Applications 2015 (FICTA 2015) serves as the knowledge centre not only for scientists and researchers in the field of intelligent computing but also for students of post-graduate level in various engineering disciplines. The book covers a comprehensive overview of the theory, methods, applications and tools of Intelligent Computing. Researchers are now working in interdisciplinary areas and the proceedings of FICTA 2015 plays a major role to accumulate those significant works in one arena. The chapters included in the proceedings inculcates both theoretical as well as practical aspects of different areas like Nature Inspired Algorithms, Fuzzy Systems, Data Mining, Signal Processing, Image processing, Text Processing, Wireless Sensor Networks, Network Security and Cellular Automata.

Dr. Swagatam Das received the B. E. Tel. E., M. E. Tel. E (Control Engineering specialization) and Ph.D. degrees, all from Jadavpur University, India, in 2003, 2005, and 2009, respectively. Currently, he is serving as an Assistant Professor at the Electronics and Communication Sciences Unit of Indian Statistical Institute, Kolkata. His research interests include evolutionary computing, pattern recognition, multi-agent systems, and wireless communication. Dr. Das has published one research monograph, one edited volume, and more than 150 research articles in peer-reviewed journals and international conferences. He is the founding co-editor-in-chief of “Swarm and Evolutionary Computation”, an international journal from Elsevier. He serves as associate editors of the IEEE Trans. on Systems, Man, and Cybernetics: Systems and Information Sciences (Elsevier). He is an editorial board member of Progress in Artificial Intelligence (Springer), Mathematical Problems in Engineering, International Journal of Artificial Intelligence and Soft Computing, and International Journal of Adaptive and Autonomous Communication Systems. He is the recipient of the 2012 Young Engineer Award from the Indian National Academy of Engineering (INAE).

Dr. Samarjit Kar completed his PhD in Mathematics from Vidyasagar University, West Bengal. He is presently an Associate Professor at the Department of Mathematics, National Institute of Technology, Durgapur, India. With over 15 years of experience in teaching, Dr. Kar is also a Visiting Professor at the Department of Mathematical Sciences, Tsinghua University, China. He has visited several universities and institutes in India and abroad. He has co-authored more than 120 technical articles in international journals, contributed volumes and conference proceedings. He has published 2 textbooks and edited 5 contributed books with Springer, American Institute of Physics, Narosa and U.N. Dhur & Sons Publications. Dr. Kar has supervised 10 PhD students. He is the Associate Editor of Journal of Uncertainty Analysis and Application (Springer) and is currently associated with an ongoing project, Hybrid modelli

Dr. Suresh Chandra Satapathy is currently working as Professor and Head, Dept. of CSE at Anil Neerukonda Institute of Technology and Sciences (ANITS), Andhra Pradesh, India. He obtained his Ph.D. in Computer Science and Engineering from JNTU Hyderabad and M.Tech in CSE from NIT, Rourkela, Odisha, India. He has 26 years of teaching experience. His research interests are data mining, machine intelligence and swarm intelligence. He has acted as program chair of many international conferences and edited 6 volumes of proceedings from Springer LNCS and AISC series. He is currently guiding 8 scholars for PhDs. Dr. Satapathy is also a Senior Member of IEEE.

career as lecturer at NERIST, Arunachal Pradesh in 1988. He has 28 years of experience in teaching and research. His area of researchincludes coding theory, data and network security, remote sensing and GIS based applications, data compression, error correction, visual cryptography, steganography, security in MANET, wireless networks and unify computing. He has supervised 13 Ph.D. students. One student has submitted (2015) the thesis and 8 are currently on-going. He has supervised 3 M.Phil and more than 30 M.Tech projects. He is life member of Computer Society of India since 1992, CRSI since 2009, ACM since 2012, IEEE since 2013 and Fellow member of IETE since 2012, Vice Chairman of CSI Kolkata Chapter. He has conducted special sessions and chaired sessions in various International Conferences and delivered invited lectures. He is reviewer of various International Journals and Conferences. He has organized more than ten international conferences of Science Direct, Springer, IEEE and edited number of proceedings as volume Editor. He has more than 350 articles published in various journals and conferences. He has also published 5 books.
Show all