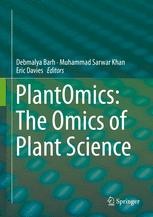 PlantOmics: The Omics of Plant Science

PlantOmics: The Omics of Plant Science provides a comprehensive account of the latest trends and developments of omics technologies or approaches and their applications in plant science. Thirty chapters written by 90 experts from 15 countries are included in this state-of-the-art book. Each chapter describes one topic/omics such as: omics in model plants, spectroscopy for plants, next generation sequencing, functional genomics, cyto-metagenomics, epigenomics, miRNAomics, proteomics, metabolomics, glycomics, lipidomics, secretomics, phenomics, cytomics, physiomics, signalomics, thiolomics, organelle omics, micro morphomics, microbiomics, cryobionomics, nanotechnology, pharmacogenomics, and computational systems biology for plants. It provides up to date information, technologies, and their applications that can be adopted and applied easily for deeper understanding plant biology and therefore will be helpful in developing the strategy for generating cost-effective superior plants for various purposes. In the last chapter, the editors have proposed several new areas in plant omics that may be explored in order to develop an integrated meta-omics strategy to ensure the world and earth’s health and related issues. This book will be a valuable resource to students and researchers in the field of cutting-edge plant omics.

Debmalya Barh (MSc, MTech, MPhil, PhD, PGDM) is the founder of the Institute of Integrative Omics and Applied Biotechnology (IIOAB), India; a global platform for multidisciplinary research and advocacy. He is a well-known biotechnologist and an active researcher in the field of integrative omics who works with 400+ well-regarded researchers from 40+ countries and has 125+ high-impact international publications, several books, and book chapters in the field of biomedical and agricultural omics. He is a globally branded editor for editing omics related research reference books and an editorial and review board members for a number of highly reputed international journals. Due to his significant contributions in the field and in promoting applied biological, agricultural and bio-medical sciences using unique research strategies; in the year 2010 he has been recognized by Who's Who in the World and in 2014 he has been entered into the Limca Book of Records, “the Indian equivalent to the Guinness Book of World Records”.

A Doctorate from the University of Cambridge, Prof. Muhammad Sarwar Khan is a highly regarded Molecular Biologist from Pakistan who was a founder Head of Biotech Interdisciplinary Division at NIBGE and is currently serving as the Director of Center of Agricultural Biochemistry and Biotechnology (CABB), University of Agriculture, Faisalabad, Pakistan. He has several awards in his credit including Civil Award (Presidential Medal for Technology), Gold Medal in Agriculture (Pakistan Academy of Sciences), Performance Gold Medal (Pakistan Atomic Energy Commission), Biotechnologist Award (National Commission on Biotechnology), and is a Life Fellow of Cambridge Commonwealth Society. He has several high impact publications in scientific Journals including Nature, Nature Biotechnology, and is an author of a number of books and book chapters. Dr. Khan has made colossal contributions in the field of Chloroplast Genetic Engineering and is a pioneer in expressing GFP in plant chloroplasts, developing transplastomic rice and sugarcane. His research focus also includes expression of foreign genes in the chloroplasts to confer agronomic traits such as insect-pest resistance, salinity and herbicide tolerance, overexpression of antigenic and therapeutic proteins in chloroplasts to develop cost-effective therapeutics and vaccines.

Eric Davies, PhD is currently an Emeritus Professor in the Department of Plant and Microbial Biology, North Carolina State University (NCSU), USA. He is the former Head of the Botany Department at NCSU and the Director of the NASA Specialized Center of Research and Training (NSCORT) in Gravitational Biology. Prof. Davies was also a former Visiting Professor at Purdue University, University of Arizona, Ehime University in Japan, University of Brussels in Belgium, Universite Blaise Pascal and Universite d’Angers in France. He is an Honorary Professor at the University of Warmia and Mazuryi in Poland, and has an Honorary Doctorate from Universite Blaise Pascal. He has several refereed publications, book chapters, and books. Prof. Davies is an expert in plant wound signaling, especially the rapidly-transmitted physical (turgor and electrical) signals, local changes in ions and hormones, and ultra-rapid, systemic transcript accumulation and degradation. His other research areas are the role of the cytoskeleton in mRNAs attachment to enhance translation in specific sub-cellular regions of the cell; gravity regulated cell signaling and gene expression, especially the response in the maize pulvinus; microwave irradiation and gene expression in plants.