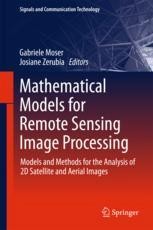 This book maximizes reader insights into the field of mathematical models and methods for the processing of two-dimensional remote sensing images. It presents a broad analysis of the field, encompassing passive and active sensors, hyperspectral images, synthetic aperture radar (SAR), interferometric SAR, and polarimetric SAR data. At the same time, it addresses highly topical subjects involving remote sensing data types (e.g., very high-resolution images, multiangular or multiresolution data, and satellite image time series) and analysis methodologies (e.g., probabilistic graphical models, hierarchical image representations, kernel machines, data fusion, and compressive sensing) that currently have primary importance in the field of mathematical modelling for remote sensing and image processing. Each chapter focuses on a particular type of remote sensing data and/or on a specific methodological area, presenting both a thorough analysis of the previous literature and a methodological and experimental discussion of at least two advanced mathematical methods for information extraction from remote sensing data. This organization ensures that both tutorial information and advanced subjects are covered. With each chapter being written by research scientists from (at least) two different institutions, it offers multiple professional experiences and perspectives on each subject. The book also provides expert analysis and commentary from leading remote sensing and image processing researchers, many of whom serve on the editorial boards of prestigious international journals in these fields, and are actively involved in international scientific societies. Providing the reader with a comprehensive picture of the overall advances and the current cutting-edge developments in the field of mathematical models for remote sensing image analysis, this book is ideal as both a reference resource and a textbook for graduate and doctoral students as well as for remote sensing scientists and practitioners.

Gabriele Moser received the laurea (M.Sc. equivalent) degree in telecommunications engineering, and the Ph.D. degree in space sciences and engineering from the University of Genoa, Italy, in 2001 and 2005, respectively. Since 2014, he has been an associate professor of telecommunications at the University of Genoa. Since 2001, he has cooperated with the Image Processing and Pattern Recognition for Remote Sensing laboratory of the University of Genoa. Since 2013, he has been the Head of the Remote Sensing for Environment and Sustainability laboratory at the Savona Campus of the University of Genoa. From January to March 2004, he was a visiting student at INRIA, Sophia Antipolis, France. In 2016, he spent a period as visiting professor at the National Polytechnic Institute of Toulouse, France. From 2012 to 2016, he was an external collaborator of the Ayin laboratory at INRIA, Sophia Antipolis, France.

He is co-author of more than 150 scientific publications in journals, international edited books, and conference proceedings. His research activity is focused on pattern recognition and image processing methodologies for remote sensing and energy applications.

He has been a Senior Member of the IEEE since 2014. He received the “Alessandro and Rinaldo Viviani 2002” laurea thesis award issued by the Italian Electrical and Electronic Association, the Best Paper Award at the 2010 IEEE Workshop on Hyperspectral Image and Signal Processing, and the Interactive Symposium Paper Award at the 2016 IEEE International Geoscience and Remote Sensing Symposium (IGARSS 2016).

At the University of Genoa, he has been teaching courses on pattern recognition, image processing, remote sensing, and electrical communications in undergraduate, graduate, and doctoral programs. He is the author of two Italian textbooks for a graduate course on remote sensing (2007) and for a doctoral course on multivariate feature space transformations (2011).

He has been involved in the technical and management activities of several scientific and applicative projects related to the exploitation of remote sensing data and funded by the European Commission, the Italian Space Agency, the Italian Ministry of Education, University, and Research, the Italian Department of Civil Protection, and regional authorities.

Josiane Zerubia has been a permanent research scientist at INRIA since 1989 and director of research since July 1995. She was head of the PASTIS remote sensing laboratory (INRIA Sophia-Antipolis) from mid-1995 to 1997 and of the Ariana research group (INRIA/CNRS/University of Nice), which worked on inverse problems in remote sensing, from 1998 to 2011. From 2012 to 2016, she was head of Ayin research group (INRIA-SAM) dedicated to models of spatio-temporal structure for high-resolution image processing with a focus on remote sensing. She has been professor of advanced techniques in remote sensing image processing at SUPAERO (ISAE) in Toulouse since 1999.

Before that, she was with the Signal and Image Processing Institute of the University of Southern California (USC) in Los-Angeles as a postdoc. She also worked as a researcher for the LASSY (University of Nice/CNRS) from 1984 to 1988 and in the Research Laboratory of Hewlett Packard in France and in Palo-Alto (CA) from 1982 to 1984. She received the M.Sc. degree from the Department of Electrical Engineering at ENSIEG, Grenoble, France in 1981, the Doctor of Engineering degree, her Ph.D. and her ‘Habilitation’, in 1986, 1988, and 1994 respectively, all from the University of Nice Sophia-Antipolis, France.

She is author or co-author of more than 350 scientific publications in international journals, edited books and conference proceedings.

She is a Fellow of the IEEE (2003- ) and IEEE Signal Processing Society Distinguished Lecturer (2016-2017). She was associate editor of IEEE Transactions on Image Processing (TIP) from 1998 to 2002; area editor of IEEE TIP from 2003 to 2006; guest co-editor of a special issue of IEEE Transactions on Pattern Analysis and Machine Intelligence in 2003; member of the editorial board of the International Journal of Computer Vision from 2004 till March 2013 and member-at-large of the Board of Governors of the IEEE Signal Processing Society from 2002 to 2004. She has also been a member of the editorial board of the French Society for Photogrammetry and Remote Sensing (SFPT) since 1998, of the Foundation and Trends in Signal Processing since 2007. She has been associate editor of the on-line resource: Earthzine (IEEE CEO and GEOSS).

“The book provides a comprehensive picture of the advances in the field of mathematical models in 2D remote sensing image analysis, which is ideal as a reference resource for remote sensing scientists, practitioners, as well as graduate and doctoral students. ... The book is presented in a lucid manner, starting with the basics and using unified notation throughout. It is therefore self-contained enough to help beginners, too.” (Zoltan Kato, IAPR Newsletter, Vol. 41 (3), July, 2019)