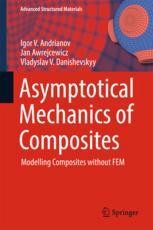 In this book the authors show that it is possible to construct efficient computationally oriented models of multi-parameter complex systems by using asymptotic methods, which can, owing to their simplicity, be directly used for controlling processes arising in connection with composite material systems.

The book focuses on this asymptotic-modeling-based approach because it allows us to define the most important out of numerous parameters describing the system, or, in other words, the asymptotic methods allow us to estimate the sensitivity of the system parameters.

Further, the book addresses the construction of nonlocal and higher-order homogenized models. Local fields on the micro-level and the influence of so-called non-ideal contact between the matrix and inclusions are modeled and investigated.

The book then studies composites with non-regular structure and cluster type composite conductivity, and analyzes edge effects in fiber composite materials. Transition of load from a fiber to a matrix for elastic and viscoelastic composites, various types of fiber composite fractures, and buckling of fibers in fiber-reinforced composites is also investigated. Last but not least, the book includes studies on perforated membranes, plates, and shells, as well as the asymptotic modeling of imperfect nonlinear interfaces.

Igor V. Andrianov was born in the Ukraine (former Soviet Union (fSU)) in 1948. He obtained his Master of Applied Mechanics degree from Dnepropetrovsk State University (DSU, Ukraine) in 1971, his PhD in Structural Mechanics from the DSU in 1975, and his DSc in Mechanics of Solids from the Moscow State Institute of Electronics and Mathematics in 1990. From 1974 to 1977, he was a Research Scientist at the DSU, from 1977 to 1990, an Associate Professor, and from 1990 to 1997, a Full Professor of Mathematics at Dnepropetrovsk Civil Engineering Institute. From 2006 to 2013 he was a Research Scientist at RWTH Aachen University (Germany). Andrianov is the author or co-author of 14 books and more than 300 papers in peer-reviewed journals. He has presented papers at more than 150 international congresses, conferences, and seminars, and also supervised 21 PhD students. Selected as a Soros Professor (1996). His research interests include Mechanics of Solids, Mechanics of Composite Materials, Nonlinear Dynamics, and Asymptotic Methods.

Jan Awrejcewicz, Head of the Department of Automation, Biomechanics and Mechatronics, Head of Ph.D. School on 'Mechanics' (since 1996) and of graduate/postgraduate programs on Mechatronics (since 2006). Recipient of multi-doctor honoris causa and the Humboldt Award. Author/co-author of over 730 journal papers and refereed international conference papers and 48 monographs. Editor of 22 books and 26 journal special issues. Principal investigator in 39 research grants by Polish Ministry of Education and Science (21), Committee for Scientific Research (17), National Science Centre (2). Member of Editorial Boards of 74 Journals (15 with IF). Organizer and Head of the series of 14 International Conferences Dynamical Systems-Theory and Application (Lodz, 1992-2017) and of 3 International Conferences “Mechatronics: Ideas for Industrial Applications” (Warsaw 2012; Lodz, 2014; Gdansk, 2015), Chair of the "International Conference of the Polish Society of Biomechanics" (Lodz, 2014). Research interest:  His papers and research cover various disciplines of mathematics, mechanics, biomechanics, automatics, physics and computer oriented sciences, with main focus on nonlinear processes.
Vladyslav V. Danishevskyy obtained his Masters (1996), Ph.D. (1999), and Doctor of Sciences (2008) degrees in Structural Mechanics from Prydniprovska State Academy of Civil Engineering and Architecture, Ukraine. He is a Full Professor at this Academy. He has authored 3 monographs and over 50 journal papers refereed by SCOPUS. Among his awards are Soros Post-Graduate Student’s Award (1997), Prize of the National Academy of Sciences of Ukraine for the best academic achievement among young scientists (2000), Alexander von Humboldt Foundation Research Fellowship (2001), NATO Research Fellowship (2003), NATO Reintegration Grant (2005), institutional academic co-operation grant of the Alexander von Humboldt Foundation (2007), research grant of the German Research Foundation (2014), Marie-Curie Research Fellowship by the European Union’s Horizon 2020 research and innovation programme (2015). He has conducted long-term research abroad in RWTH Aachen University, Germany (2001–2002), in the University of Rouen, France (2003–2004), and in Keele University, UK (2015– 2017). His research interests cover mechanics of heterogeneous media and structures, asymptotic methods, nonlinear dynamics.