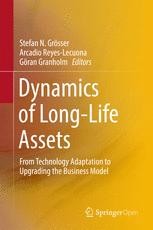 From Technology Adaptation to Upgrading the Business Model

This book is published under a CC BY-NC 4.0 license. The editors present essential methods and tools to support a holistic approach to the challenge of system upgrades and innovation in the context of high-value products and services. The approach presented here is based on three main pillars: an adaptation mechanism based on a broad understanding of system dependencies; efficient use of system knowledge through involvement of actors throughout the process; and technological solutions to enable efficient actor communication and information handling.

The book provides readers with a better understanding of the factors that influence decisions, and put forward solutions to facilitate the rapid adaptation to changes in the business environment and customer needs through intelligent upgrade interventions. Further, it examines a number of sample cases from various contexts including car manufacturing, utilities, shipping and the furniture industry. The book offers a valuable resource for both academics and practitioners interested in the upgrading of capital-intensive products and services.

“The work performed in the project “Use-It-Wisely (UiW)” significantly contributes towards a collaborative way of working. Moreover, it offers comprehensive system modelling to identify business opportunities and develop technical solutions within industrial value networks. The developed UiW-framework fills a void and offers a great opportunity. The naval construction sector of small passenger vessels, for instance, is one industry that can benefit.”

Nikitas Nikitakos, Professor at University of the Aegean, Department of Shipping, Trade, and Transport, Greece.

“Long-life assets are crucial for both the future competiveness and sustainability of society. Make wrong choices now and you are locked into a wrong system for a long time. Make the right choices now and society can prosper. This book gives important information about how manufacturers can make right choices.”

Göran Granholm is a Senior Scientist at the Systems Engineering business area, VTT Technical Research Centre of Finland. He received his MSc degree from Helsinki University of Technology in 1990. With a background in civil engineering and hydraulics he has since been involved in research projects across industries including the maritime and defense sectors. He has over 20 years of experience as researcher and project manager in both national and multinational projects, focusing on new technologies and simulation-based approaches to training and user involvement in concept evaluation and early design. Most recently he has been involved in projects focusing on the implementation of Systems Engineering approaches, requirements engineering, and product data management in networked organizations.