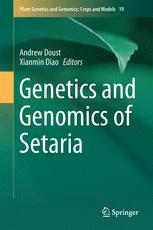 Genetics and Genomics of Setaria

Setaria viridis and S.italica make up a model grass system to investigate C4 photosynthesis, cell wall biosynthesis, responses to drought, herbicide, and other environmental stressors, genome dynamics, developmental genetics and morphology, and interactions with microorganisms. Setaria viridis (green foxtail) is one of the world’s most widespread weeds, and its small size, native variation, rapidly burgeoning genetic and genomic resources, and transformability are making it the system of choice for both basic research and its translation into crop improvement. Its domesticated variant, S. italica (foxtail millet), is a drought-hardy cereal grown in China, India and Africa, and new breeding techniques show great potential for improving yields and nutrition for drought-prone regions. This book brings together for the first time evolutionary, genomic, genetic, and morphological analyses, together with protocols for growing and transforming Setaria, and approaches to high throughput genotyping and candidate gene analysis. Authors include major Setaria researchers from both the USA and overseas.