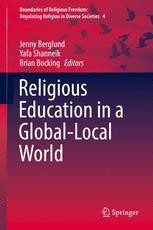 Religious Education in a Global-Local World

This book examines Religious Education (RE) in over ten countries, including Australia, Indonesia, Mali, Russia, UK, Ireland, USA, and Canada. Investigating RE from a global and multi-interdisciplinary perspective, it presents research on the diverse past, present, and possible future forms of RE. In doing so, it enhances public and professional understanding of the complex issues and debates surrounding RE in the wider world. The volume emphasizes a student-centred approach, viewing any kind of ‘RE’, or its absence, as a formative lived experience for pupils. It stresses a bottom-up, sociological and ethnographic/anthropological research-based approach to the study of RE, rather than the ‘top down’ approaches which often start from prescriptive legal, ideological or religious standpoints.   The twelve chapters in this volume regard RE as an entity that has multiple and contested meanings and interpretations that are constantly negotiated. For some, ‘RE’ means religious nurturing, either tailored to parental views or meant to inculcate a uniform religiosity. For others, RE means learning about the many religious and non-religious world-views and secular ethics that exist, not promoting one religion or another. Some seek to avoid the ambiguous term ‘religious education’, replacing it with terms such as ‘education about religions and beliefs’ or ‘the religious dimension of intercultural education’.

Jenny Berglund is Associate Professor and senior lecturer. Her particular area of interest concerns the matter of Islam and minority religious education. This is reflected in her 2009 dissertation Teaching Islam, Islamic Religious Education at Muslim Schools in Sweden (Waxmann), which examined the formation of Islamic Religious Education (IRE) as a confessional subject under the jurisdiction of the Swedish school system. Since earning her PhD, Jenny has collaborated on the editing of several Swedish books, in which her own contributions have generally dealt with Islam in Sweden. She is also working with the project "Religion as a Resource", which concerns the lives, values, relations, leisure time activities and religious interests of Sweden's youth populations. Her particular task in this regard has been to analyse the questionnaire responses of Muslim participants. Jenny has also been part of the project TRATEBB (Teaching Religion and Thinking Education at the Baltic-Barent Brim), a research project designed to study religious education at four sets of "twin-schools" located on either side of four state boundaries in the Baltic-Barent region. Berglund is a committee member of EASR (European Association for the Study of Religion) and is actively involved in the organization's working group on religious education. She has initiated (and personally participates in) a teacher exchange program with the Centre for Women's Studies at the University of Jordan. From 2014, she will be working with a new project called CARDIPS (Cultural and religious diversity in primary school).

Professor of the Study of Religions and Head of Department. He became Professor of the Study of Religions and Head of the newly established Study of Religions Department at UCC in January 2008. He is currently acting Head of the School of Asian Studies at UCC. Professor Bocking's publications include works on Japanese religions and Buddhism as well as essays and articles on the Study of Religions as taught in universities. His books include the first English translation of the 5th century Chinese text of Nagarjuna's Middle Treatise (1995); a Dictionary of Shinto (1996) and a study of the changing form and interpretations over four centuries of a key Japanese religious scroll known as 'The Oracles of the Three Shrines' (in Japanese: sanja takusen) (2000). He has written many articles on Japanese religions, especially New Religions and Shinto, as well as working on theoretical and pedagogical issues in the study of religions including religious 'experience' and the teaching of 'Asian' religions in a globalising society. He is currently researching, with Alicia Turner (York University, Toronto) and Laurence Cox (NUI Maynooth), the life and career of the forgotten 'Irish Buddhist' U Dhammaloka (?1856-?1914), a pioneer Western Buddhist monk celebrated throughout S/E Asia in the early 1900s, and with Laurence Cox and Yoshinaga Shin'ichi (Maizuru College) the life of the Irish Japanologist and pioneer London Buddhist missionary Charles J W Pfoundes (1840-1907).

Yafa Shanneik is Lecturer in Religious Studies at the University of South Wales. She works on Religious Education in Ireland and published together with Karl Kitching Children’s Beliefs and Belonging: A Schools and Families Report from the ‘Making Communion’ Study (Cork: 2015). In addition, she has a particular research interest in the authority and leadership of Sunni and Shia women and the changing nature of women’s participation in religious practices in Europe and the Middle East. Among her most recent publications is ‘Remembering Karbala in the Diaspora: Religious Rituals among Iraqi Shii Women in Ireland’ (Religion, 45:1, 2015).

“Berglund, Bocking and Shanneik review various approaches to religious education (RE) around the world while also highlighting common issues related to religious education. … I liked the consistent analysis of RE from both confessional and non-confessional perspectives, and felt that the authors presented descriptions that were both scholarly and palatable. … The book is a good read on how to evaluate religious education in a larger context.” (Calvin G. Roso, International Journal of Christianity and Education, Issue 1-2, 2017)