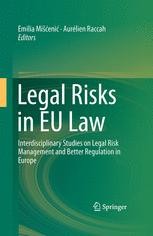 This book takes a completely new and innovative approach to analysing the development of EU law. Within the framework of different important areas of EU law, such as the internal market, consumer protection law, social law, investment law, environment law, migration law, legal translation and terminology, it examines the Union’s approach to the regulation and management of legal risks. Over the years, the Union has come to a point where it is becoming increasingly difficult to justify its authority to regulate in various areas of law. In managing legal risks deriving from the diversity of Member States’ laws, which create barriers to trade and hinder the Union’s economy, the Union itself has actually produced new legal risks that now have to be addressed. This failure on the part of EU institutions to manage legal risks has contributed to legal uncertainty for actors operating on the internal market. This book intends to contribute to the Union’s smoother functioning and continuing development by proposing effective concrete solutions for managing the legal risks distorting the development of various areas of EU law. It pursues an innovative and effective approach to identify legal risks, their causes at the EU level and their impacts on the functioning of the Union and its Member States. By presenting new approaches in this context, the first book on legal risk management in the EU will actively promote the improvement of the EU lawmaking process and the application of EU law in practice.

Emilia Mišćenić, Dr. Iur. (Graz), LL.M. (Saarbrücken), is Assistant Professor at the Chair of European and Private International Law, Faculty of Law, University of Rijeka (Croatia). After completing the postgraduate masters study programme at the Europa-Institut of the Saarland University in Germany, she enrolled in the postgraduate doctoral scientific study programme of the Faculty of Law, Karl-Franzens University of Graz. Upon completing the doctoral study programme, she published a scientific monograph in German entitled “Der Verbraucherkreditvertrag in der EU und Kroatien aus materiell- und kollisionsrechtlicher Sicht” (LIT Verlag, 2010). In 2011, she received the Annual National Science Award for Junior Researcher in the field of social sciences from the National Science Awards Committee of the Croatian Parliament for her scientific monograph. In 2012, she received an award from the Foundation of the University of Rijeka for her special contributions to scientific research and teaching activities. In 2013, she was selected by the Ministry of Science, Education and Sports as one of the twenty most successful research assistants in the Republic of Croatia. Special recognition of her work came in the form of a quotation from the Advocate General Trstenjak of the Court of Justice of the European Union in the Opinion to the Case C-453/10, Pereničová et Perenič, who cited her award-winning monograph. She is teaching at the Faculty of Law, University of Rijeka, Faculty of Law, Business and Economics of the University of Bayreuth and the Law Faculty of the Catholic University of Lille.

Aurélien Raccah, PhD at European University Institute (Florence), LL.M. (EUI, Sorbonne), is Associate Professor and Vice Dean at the Law Faculty of the Catholic University of Lille and Barrister in Paris at ELEA AVOCAT. He wrote a PhD thesis on the following topic: “The Direct Implementation of EU Law by the Devolved Bodies. Comparative Approach in Germany, the UK and France”. Aurélien Raccah is co-director of the International and European Law School (IELS) where he teaches EU Law. As researcher, he specialised in EU Law and published articles relating to EU law and administrative, environmental and social law and a book on the Lisbon Treaty titled “Traité de Lisbonne: De nouvelles compétences pour l'Union”, L’Harmattan, 2012. He is one of the founding members of the Global Legal Network.