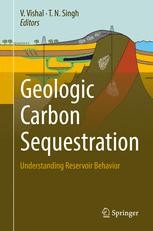 This exclusive compilation written by eminent experts from more than ten countries, outlines the processes and methods for geologic sequestration in different sinks. It discusses and highlights the details of individual storage types, including recent advances in the science and technology of carbon storage. The topic is of immense interest to geoscientists, reservoir engineers, environmentalists and researchers from the scientific and industrial communities working on the methodologies for carbon dioxide storage.

Increasing concentrations of anthropogenic carbon dioxide in the atmosphere are often held responsible for the rising temperature of the globe. Geologic sequestration prevents atmospheric release of the waste greenhouse gases by storing them underground for geologically significant periods of time. The book addresses the need for an understanding of carbon reservoir characteristics and behavior. Other book volumes on carbon capture, utilization and storage (CCUS) attempt to cover the entire process of CCUS, but the topic of geologic sequestration is not discussed in detail. This book focuses on the recent trends and up-to-date information on different storage rock types, ranging from deep saline aquifers to coal to basaltic formations.
Show all
About the authors

Vikram Vishal is an Assistant Professor in the Department of Earth Sciences, Indian Institute of Technology (IIT) Bombay, Mumbai, India. He worked in the Department of Earth Sciences, IIT Roorkee as DST Inspire Faculty and at the Department of Energy Resources Engineering, Stanford University (USA) as a Fulbright-Nehru Postdoctoral fellow during 2013-15. He obtained a Ph.D. degree jointly from IIT Bombay (India) and Monash University (Australia). He is a recipient of the National Geosciences Award and Young Researcher by the Government of India, the Young Scientist Award by the Indian Science Congress Association, and Dr. Coggin Brown Memorial Award from the Mining, Geological and Metallurgical Institute of India, Kolkata. He holds to his credit a total of 42 publications on different domains of carbon sequestration, engineering geology, geomechanics and unconventional petrophysics in various journals, book chapters and conference proceedings of repute. He is investigating three research projects funded by the Ministry of Science and Technology by the Govt. of India.

Trilok Nath Singh is the Institute Geoscience Chair Professor in the Department of Earth Sciences, IIT Bombay, Mumbai and is an expert in the field of rock mechanics, mining geology and clean energy. He received Ph.D. degree from the Institute of Technology BHU, Varanasi in 1991 and subsequently served the institute until 2003. He is a recipient of many prestigious awards such as the National Mineral Award, the first P. N. Bose Mineral Award, the SEAGATE Excellence Award for Geo-Engineering and the GSI Sesquicentennial Commemorative Award. He has nearly 28 years of experience in research and teaching with 16 doctoral theses completed under his supervision and has authored more than 350 publications in various journals and conferences of national and international repute. He is currently leading projects of immense scientific and industrial importance related to coalbed methane, carbon sequestration, shale gas, nuclear waste repositories, and mine slope stability, to name a few. He is on the governing and advisory councils of several national institutes and universities.