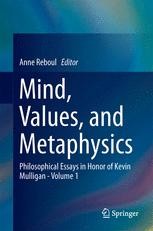 This book addresses five main topics of metaphysics in its first section: formal objects and truth-makers; tropes; properties and predicates; varieties of relations; and the notion of explanation in metaphysics. The second part of this volume focuses on the history of philosophy with an emphasis on Austrian philosophy: the ideas of Bolzano, Wittgenstein, Locke and Bergson, amongst others, are explored in the papers presented here.

This is the first volume in a two-volume set that originates from papers presented to Professor Kevin Mulligan, covering the subjects that he contributed to during his career including ontology, mind and value, history and philosophy of mind and philosophy of language. This volume contains thirty two chapters, written by researchers from across Europe, North America and North Africa.

These papers cover topics in metaphysics ranging from Lehrer and Tolliver’s discussion of truth and tropes, to Johansson’s defence of the distinction between thick and thin relations and Persson and Sahlin’s presentation of the difficulties inherent in applying the concept of explanation in metaphysics.

Papers on the history of philosophy include a look at Bolzano’s formative years and his conception of mathematics. De Libera examines Brentano’s adverbial theory of judgment and Fisette traces the history of the Philosophical Society of the University of Vienna in the late 19th and early 20th century. Marion contests the trendy pragmatist accounts that lump Wittgenstein and Heidegger together and there are analyses of Locke and Bergson’s work, amongst the many papers presented here.

This volume contains three chapters in French and one in Spanish. The second volume of this set looks at ethics, values and emotions, epistemology, perception and consciousness, as well as philosophy of mind and philosophy of language.

Anne Reboul is senior researcher at the National Center for Scientific Research (CNRS) in a laboratory in Lyons. She has a Ph.D. in Language Sciences as well as a Ph.D. in Philosophy. She has been mainly interested in philosophy of language and philosophy of mind and more specifically in pragmatics, semantics and their interface. She has published a number of papers and books in both French and English.