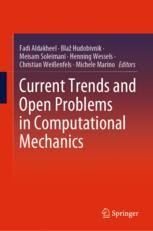 This Festschrift is dedicated to Professor Dr.-Ing. habil. Peter Wriggers on the occasion of his 70th birthday. Thanks to his high dedication to research, over the years Peter Wriggers has built an international network with renowned experts in the field of computational mechanics. This is proven by the large number of contributions from friends and collaborators as well as former PhD students from all over the world. The diversity of Peter Wriggers network is mirrored by the range of topics that are covered by this book. To name only a few, these include contact mechanics, finite & virtual element technologies, micromechanics, multiscale approaches, fracture mechanics, isogeometric analysis, stochastic methods, meshfree and particle methods. Applications of numerical simulation to specific problems, e.g. Biomechanics and Additive Manufacturing is also covered. The volume intends to present an overview of the state of the art and current trends in computational mechanics for academia and industry.

Fadi Aldakheel, Dr.-Ing. habil., is since August 2017 group leader of the section material modeling and damage mechanics at the Institute of Continuum Mechanics at the Leibniz Universität Hannover LUH. He finished his Ph.D. in 2016 at the Universität Stuttgart Institute for Mechanics in Civil Engineering. His supervisor was the late Prof. Christian Miehe. Thereafter, he worked as a Postdoc and course director of the international master program COMMAS at the Universität Stuttgart. In 2021 he successfully finished the "Habilitation" at the Faculty of Mechanical Engineering - LUH under the supervision of Prof. Peter Wriggers. Fadi Aldakheel has co-authored more than 40 papers in peer- reviewed International Journals. He has been awarded numerous awards and grants as principal investigator, among which the Richard-von-Mises Prize in GAMM (Society of Applied Mathematics and Mechanics) and PI in CRC1153 / SPP2020. His research interests are related to modeling of material behaviors, variational principles, computational solid mechanics, structural mechanics, finite/virtual element method, multiphysics and multi-scales problems, machine learning, and experimental validation.
Blaž Hudobivnik, Dr., born in Slovenia where he obtained his university and Doctoral degree at University of Ljubljana. He studied Civil Engineering and finished his doctorate in 2016 under the supervision of Prof. Jože Korelc. Since November 2016 he is employed as a Scientific researcher at Institute of Continuum Mechanics at the Leibniz Universität Hannover. Alongside research, he is also advisor in numerical implementation to otherinstitute members, due to his expert knowledge of the Software-Tool AceGen/AceFEM, developed by his Doctoral advisor Prof. Korelc. His primary research interest at IKM are related to developments of the virtual element method and its application to wide range of problems. 2D and 3D space, to linear and nonlinear material behavior for static and dynamic solids, first and second order VEM, contact problems, additional his main research was coupled problems (thermo-hydro-mechanics), phase field, multi-scale and optimization problems. During his research time he coauthored around 27 peer-reviewed contributions.
Meisam Soleimani, Dr.-Ing., was born in Iran where he completed his Bachelor's and Master's studies in Mechanical Engineering at Sharif and Tehran University, respectively. Pursuing his academic path, he obtained his Ph.D. from Leibniz University in Hannover, Germany in 2017. Since 2020, he serves as the group leader of the computational biomechanics division at the institute of continuum mechanics (IKM) in Hannover. His fields of expertise are continuum mechanics, Multiphysics, and numerical simulation with application in computational biomechanics. In this regard, some of his recent research works are related to growth phenomena, arterial pathology, tumor modeling, biofilms simulation, etc. Upon approval of the German Research Foundation (DFG) in 2021, a new Transregional Collaborative Research grant called TRR 298 SIIRI: Safety-Integrated and Infection-Reactive Implants, on the implant technology with around 12 Mio € has been awarded. He is currently one of the principal investigators in this research consortium in which more than 150 scientists from medical schools and engineering departments in Germany are involved.
Henning Wessels has been appointed Juniorprofessor (tenure track) for data-driven modeling and simulation of mechanical systems at Technische Universität Braunschweig in May 2021. He has received his PhD from Leibniz Universität Hannover under the guidance of Peter Wriggers in 2019. During this time, he has researched on meshfree particle methods for mesoscale simulations of additive manufacturing. After his PhD, he continued working with Peter Wriggers as a Postdoc. Since then, his research focuses on the integration of physical constraints into data-driven methods in the field of computational mechanics. He has profited from several stays abroad. In 2017 the Fulbright Commission has supported a research stay in the group of Prof. Tarek I. Zohdi at UCBerkeley. He has also been awarded a Feodor Lynen fellowship for research stays with George Em Karniadakis at Brown University planned for 2022 and 2023. His research interests are related to scientific machine learning, computational fluid and solid mechanics, physics-informed neural networks, multi-scale and multi-physics problems as well as meshfree particle methods.
Prof. Dr.-Ing. Christian Weißenfels studied civil engineering at the Technical University of Munich. He received his doctorate and habilitation from Leibniz Universität Hannover. After managing the professorship for Mechanics at Technische Universität Braunschweig, he has been Professor for Data-Driven Computational Materials Science and Engineering at the University of Augsburg since 2021. He worked with Prof. Wriggers for more than 10 years during his time at the Leibniz Universität Hannover. His areas of work include the automatic generation of material models and the solution of differential equations using artificial intelligence algorithms. He is also involved in the development of accurate and efficient meshfree methods, the simulation of processes in Additive Manufacturing, and contact mechanics.
Michele Marino is currently Assistant Professor in Mechanics of Materials and Structures at the Department of Civil Engineering and Computer Science at the University of Rome Tor Vergata. In his career, he has worked for 5 years as post-doctoral researcher at the Institute of Continuum Mechanics (IKM) of the Leibniz University of Hannover under the mentorship of Professor Wriggers. Michele Marino has co-authored more than 35 papers on peer-reviewed International Journals and 5 chapters in International Books. He has been awarded numerous awards and grants as principal investigator or unit coordinator, among which a tenure-track young professorship within the Rita-Levi Montalcini Program (MIUR, Italy) and the Junior AIMETA Prize in Mechanics of Solids and Structures. Research interests cover multiscale constitutive modelling and finite element analyses, optimization problems and data-driven approaches, chemo-mechano-biological modelling. His research activities find applications in structural analyses with microstructured materials, biomechanics, and tissue engineering.