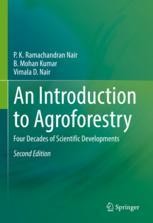 An Introduction to Agroforestry

Agroforestry – the practice of growing trees and crops in interacting combinations – is recognized the world over as an integrated approach to sustainable land-use. Agroforestry systems, being multifunctional, facilitate not only the production of food and wood products but also provide a variety of ecosystem services such as climate-change mitigation, biodiversity conservation, and soil quality improvement.

Agroforestry research has made rapid strides since organized efforts started in the late 1970s. Today, a vast body of scientific knowledge and an impressive array of publications on agroforestry are available. Four World Congresses on Agroforestry conducted once every five years since 2004 have brought together the global community of agroforestry professionals and practitioners to share and discuss the emerging trends and paradigm shifts in this field. The fifth Congress is scheduled to be held in Québec, Canada.

However, a comprehensive college-level textbook incorporating these research findings did not exist until this book was first published. The first edition of this book in 1993 (Nair, P. K. R., 1993) is out of print and somewhat dated. This revised edition, with emphasis on the scientific developments during the past more than four decades, addresses this long-felt need.

P. K. Ramachandran Nair, Distinguished Professor (Emeritus) at the University of Florida, is a pioneer in the academic field of agroforestry. He has made outstanding contributions to the development of the subject worldwide during the past 50 years such that the name PK Nair has become almost synonymous with agroforestry. Nair started his career as a multiple cropping agronomist at the plantation (tree) crops research institute in his native Kerala, India. In 1978 he became a founding member and a lead scientist of ICRAF (World Agroforestry), a CGIAR center, in Kenya. He joined the University of Florida in 1987, where he taught agroforestry and conducted and coordinated research in the subject for 32 years, and retired to Emeritus status in 2019. Nair holds six doctoral degrees – two earned and four honoris causa – and has worked in five continents. He is a Fellow of the American Association for the Advancement of Science, American Society of Agronomy, Crop Science Society of America, Soil Science Society of America, and the National Academy of Agricultural Sciences, India. His numerous other recognitions include the IUFRO Scientific Achievement Award, Research Award of the Society of American Foresters, Fulbright Distinguished Chair Award, and the Humboldt Prize, Germany.

Vimala D. Nair, Research Professor with the Soil and Water Sciences Department, is a long-term faculty collaborator in the Agroforestry Program at the University of Florida. After her PhD in soil biogeochemistry from the University of Göttingen, Germany, she conducted research and taught at the University of Nairobi, Kenya, for several years before joining the University of Florida in the late 1980s. Her contributions to the development and application of the phosphorus saturation ratio for Florida soils have earned her international recognition. Her special areas of contributions to agroforestry research include the role of agroforestry in soil carbon sequestration, water quality and environmental protection, and the use of biochar in soil management. She has traveled widely and conducted training courses and collaborative research in several countries. Vimala Nair is a courtesy faculty member at the University of Santiago de Compostela, Spain, a Fellow of the Soil Science Society of America (SSSA) as well as the American Society of Agronomy, and the recipient of the SSSA 2021 Soil Science Research Award that recognizes outstanding research contributions in soil science.