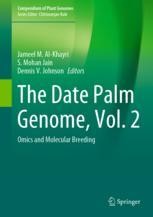 This book is the first comprehensive assemblage of contemporary knowledge relevant to genomics and other omics in date palm. Volume 2 consists of 11 chapters. Part I, Nutritional and Pharmaceuticals Properties, covers the utilization of date palm as an ingredient of various food products, a source of bioactive compounds and the production of nanomaterials. Part II, Omics Technologies, addresses omics resources, proteomics and metabolomics. Part III, Molecular Breeding and Genome Modification, focuses on genetic improvement technologies based on mutagenesis, quantitative traits loci and genome editing. Part IV, Genomics of Abiotic and Biotic Stress, covers metagenomics of beneficial microbes to enhance tolerance to abiotic stress and the various genomics advances as they apply to insect control.

This volume represents the efforts of 34 international scientists from 12 countries and contains 65 figures and 19 tables to illustrate presented concepts. Volume 1 is published under the title: Phylogeny, Biodiversity and Mapping.

Prof. Jameel M. Al-Khayri is a Professor of Plant Biotechnology affiliated with the Department of Agricultural Biotechnology, King Faisal University, Saudi Arabia. He received B.S. in Biology in 1984 from the University of Toledo, M.S. in Agronomy in 1988 and Ph.D. in Plant Science in 1991 from the University of Arkansas. He is a Member of the International Society for Horticultural Science and Society for In Vitro Biology as well as National Correspondent of the International Association of Plant Tissue Culture and Biotechnology. For the last three decades, he dedicated his research efforts to date palm. He has authored over sixty research articles in referred international journals, twenty-five review chapters, and edited seven journal special issues. In addition, he has edited five reference books on date palm biotechnology, date palm utilization of genetic resources, date palm biotechnology protocols and seven volumes of the book series Advances in Plant Breeding Strategies. He has been involved in organizing international scientific conferences and contributed numerous research presentations. In addition to teaching, students advising and research, he held administrative responsibilities as the Assistant Director of Date Palm Research Center, Head of Department of Plant Biotechnology, and Vice Dean for Development and Quality Assurance. Prof. Al-Khayri has served as a Member of Majlis Ash-Shura (Saudi Legislative Council) for the 2009-2012 term. Currently, he is maintaining an active research program on date palm focusing on genetic transformation, secondary metabolites and in vitro mutagenesis to enhance tolerance to abiotic and biotic stress.

Prof. Shri Mohan Jain is a Consultant and Plant Biotechnologist, Department of Agricultural Sciences, University of Helsinki, Helsinki, Finland; he received M. Phil in 1973 and Ph.D. in 1978 from Jawaharlal Nehru University, New Delhi, India. He was a Postdoctoral Fellow in Israel, USA, and Visiting Scientist/Professor in Japan, Malaysia, Germany and Italy. He was a Technical Officer, Plant Breeding and Genetics, International Atomic Energy Agency (IAEA), Vienna, Austria, during 1999-2005. He is a Member of International Association of Plant Tissue Culture and Biotechnology; Editorial Board Member of Euphytica, In Vitro, Propagation of Ornamental Plants, Emirates J. Food and Agriculture, and a series on Forest Biotechnology. His publications are more than 160 in peer-reviewed journals, book chapters and conference proceedings, and he has edited 55 books; he is Invited Speaker and acted as a Chairperson in several international conferences worldwide. He was awarded Nobel Peace Prize, 2005 in commemoration the awarding to IAEA of the Nobel Peace Prize for 2005; also Former Consultant to IAEA, the European Union, The Government of Greneda, Iranian Private Company and the Egyptian Government. Currently, his research interests are somatic embryogenesis, organogenesis, haploidy, somatic cell hybridization, somaclonal variation and mutagenesis mainly in medicinal plants, date palm, and banana genetic improvement, genetic diversity, erosion, conservation and utilization in the context of climate change and food and nutritional security.

Prof. Dennis V. Johnson is a Consultant and Former University Professor. He is a graduate of the University of California Los Angeles where he completed his B.A. (1966), M.A. (1970) and Ph.D. (1972) degrees in Geography, with specialization in agriculture and biogeography. He has taught at several colleges and universities including the University of Houston and was a Visiting Professor for two years at the University of Ceará, Fortaleza, Brazil.  Dr. Johnson also has worked extensively with international development agencies providing technical assistance to agriculture and forestry on projects and programs in Africa, Asia, Europe and Latin America.  He has published numerous articles on palm utilization and conservation and has edited or written books for FAO, IUCN and UNEP. He has also translated into English plant science books from Portuguese and Spanish.  A decade ago, Dr. Johnson began to focus his research on date palm, in particular its introduction to non-traditional areas such as Spain, North and South America and Australia.  He co-authored a book on date growing in the USA, has made presentations at five international date palm conferences and co-edited books on date palm, sago palm and plant breeding.