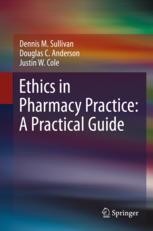 This textbook offers a unique and accessible approach to ethical decision-making for practicing pharmacists and student pharmacists. Unlike other texts, it gives clear guidance based on the fundamental principles of moral philosophy, explaining them in simple language and illustrating them with abundant clinical examples and case studies. The strength of this text is in its emphasis on normative ethics and critical thinking, and that there is truly a best answer in the vast majority of cases, no matter how complex. The authors place high trust in a pharmacist’s moral judgment. This teaches the reader how to think, based on ethical principles, not necessarily what to think. This means navigating between the two extremes of overly theoretical and excessively prescriptive. The cogent framework given in this text uses the language of competing duties, identifying the moral principles at stake that create duties for the pharmacist. This is the balancing act of normative ethics, and of deciding which duties should prevail in a given clinical situation. This work presents a clear-cut pathway for resolving ethical dilemmas encountered by pharmacists, based on foundational principles and critical thinking.

Presents a clear-cut pathway for resolving the ethical dilemmas encountered by pharmacists, based on foundational principles and critical thinking.

Dr. Dennis Sullivan is an emeritus professor of pharmacy practice at Cedarville University, Cedarville, Ohio. He received his MD from Case Western Reserve School of Medicine in 1978, after which he trained in general surgery, and served for two years of active duty in the U.S. Army at Fort Campbell, Kentucky. Dr. Sullivan worked for twelve years as a medical missionary, providing surgical care in Haiti and in the Central African Republic. From 1996 to 2019, he was a member of the faculty at Cedarville University. In 2004, he received his MA in bioethics from Trinity Graduate School in Chicago. He has taught human biology, pharmacy ethics, and pharmacy law. He directed Cedarville University’s Center for Bioethics until his retirement in 2019. He still teaches part-time at Cedarville and at Wright State University, and serves as an academic ethicist on two Dayton area ethics committees.

Dr. Douglas C. Anderson Jr. is a professor of pharmacy practice at Cedarville University, Cedarville, Ohio, and a Clinical Pharmacist Specialist in Primary Care for the INTEGRIS Health System in Oklahoma City. He received his B.S. Pharmacy in 1988 and Pharm.D. in 1992, both from the University of Oklahoma College of Pharmacy. He has also completed a Pharmacy Practice (PGY1) Residency at St. Anthony Hospital in Oklahoma City, and a Fellowship in Adult Medicine at the University of Oklahoma Health Sciences Center. As a clinician/scholar, Dr. Anderson’s areas of expertise include primary care/ambulatory care, anticoagulation and thromboembolic disorders, as well as cardiovascular risk reduction.

Dr. Cole is an assistant professor of pharmacy practice at Cedarville University, Cedarville, Ohio. He received his PharmD from Ohio Northern University in 2006. Dr. Cole worked for ten years as a pediatric pharmacist at Nationwide Children’s Hospital in Columbus, Ohio. There he served as a clinical pharmacist, pharmacy educator, and clinical coordinator, overseeing both clinical and investigational drug services. He now teaches pediatrics and serves as chair of the Department of Pharmacy Practice He also directs Cedarville University’s Center for Pharmacy Innovation.