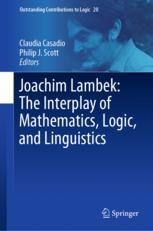 Joachim Lambek: The Interplay of Mathematics, Logic, and Linguistics

This book is dedicated to the life and work of the mathematician Joachim Lambek (1922–2014). The editors gather together noted experts to discuss the state of the art of various of Lambek’s works in logic, category theory, and linguistics and to celebrate his contributions to those areas over the course of his multifaceted career.

After early work in combinatorics and elementary number theory, Lambek became a distinguished algebraist (notably in ring theory).  In the 1960s, he began to work in category theory, categorical algebra, logic, proof theory, and foundations of computability.  In a parallel development, beginning in the late 1950s and for the rest of his career, Lambek also worked extensively in mathematical linguistics and computational approaches to natural languages. He and his collaborators perfected production and type grammars for numerous natural languages. Lambek grammars form an early noncommutative precursor to Girard’s linear logic. In a surprising development (2000), he introduced a novel and deeper algebraic framework (which he called pregroup grammars) for analyzing natural language, along with algebraic, higher category, and proof-theoretic semantics.

This book is of interest to mathematicians, logicians, linguists, and computer scientists.

Claudia Casadio is Full Professor in Logic and Philosophy of Science at the University G. D'Annunzio, Chieti–Pescara, in the Department of Modern Languages, Literatures and Cultures.  Her research focuses on language and thinking, in particular: linguistic and cognitive categories, formal properties of natural language, human reasoning, interaction of formal, and mathematical vs. concrete thinking.
Philip Scott is Emeritus Full Professor, Department of Mathematics and Statistics, University of Ottawa.  His interests include categorical logic and algebra, proof theory, linear logic, and theoretical computer science.  He is a senior editor of two major journals in these areas.  He was a long-time collaborator of J. Lambek and the co-author of their well-known book Introduction to Higher Order Categorical Logic (1986).