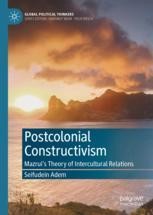 This book introduces Ali Mazrui’s delightfully stimulating scholarship about intercultural relations, calling it Postcolonial Constructivism, and shares elements of his intellectual vitality in an original way.  It begins with a chronicle of Mazrui’s eventful, sixty-year journey as a scholar of International Relations. It then proceeds to present some of the most remarkable yet least remarked up on features of his intellectualism, including his paradoxes, his perceptive typologies, his neologisms as well as his interactions with historical figures. The book draws on materials which were either unavailable until now or were found scattered in time and space. Designed as an invitation to a wider audience to the supermarket of Mazrui’s ideas, this book also seeks to underscore the timeliness and possible durability of many of his observations about intercultural relations.Thorough, comprehensive and up-to-date, this book is a concise account of the core of Mazrui’s vast body of work.

'Seifudein Adem has done a great service to all of us who focus on learning about and publicizing the contributions of global south scholars to current Western-dominant international relations approaches. In this well-organized work, he manages to synthesize the prolific intellectual contributions of the consummate and outstanding African scholar Ali Mazrui, using what he calls 'postcolonial constructivism', while making clear that Mazrui’s work cannot solely be restricted to prevailing perspectives. At the same time, his personal friendship and close working relationship with Mazrui allow him to offer the reader a unique glimpse of the witty Africanist who was befriended by so many, including major political figures. Given the current drive to “globalize” international relations, this book is a timely contribution that highlights the overlooked, rich narratives of scholars and thinkers from the global south.'

'Ali Mazrui’s remarkable corpus lives, and Seifudein Adem interprets it for today when its salience is undeniable around race, religion etc. Adem’s decade with the maestro maximizes his book’s insights for Africa and the world as both are in flux.'

'Passionate about preserving African culture and the dignity of her people, Ali Mazrui was never oblivious to the forces of globalization, positive or negative, and hence the emergence of a world federation of cultures in which his scholarship lived, moved and had its being. He was a global scholar who contributed immensely to the analysis and interpretation of various aspects of international relations, social conflicts, the human condition and the future of humankind in a changing world. His ideas quite often sprang from lived experiences and discourses from which he churned out chains of books and articles whose styles were peculiar to himself in what came to be referred to as 'Mazruiana'. This book finally tells the story of the genesis and evolution of this body of thought and its contribution to knowledge.'

'This is the ultimate compendium of Ali Mazrui’s interactions with men and women of power, among others, including several presidents and prime ministers. It also captures Mazrui’s unique approach to scholarship and has a large collection of his deeply thoughtful paradoxes and analytical categories.'