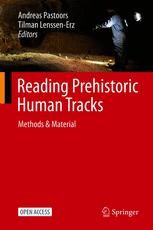 This Open Access book explains that after long periods of prehistoric research in which the importance of the archaeological as well as the natural context of rock art has been constantly underestimated, research has now begun to take this context into focus for documentation, analysis, interpretation and understanding. Human footprints are prominent among the long-time under-researched features of the context in caves with rock art. In order to compensate for this neglect an innovative research program has been established several years ago that focuses on the merging of indigenous knowledge and western archaeological science for the benefit of both sides.

The book gathers first the methodological diversity in the analysis of human tracks. Here major representatives of anthropological, statistical and traditional approaches feature the multi-layered methods available for the analysis of human tracks. Second it compiles case studies from around the globe of prehistoric human tracks. For the first time, the most important sites which have been found worldwide are published in a single publication. The third focus of this book is on firsthand experiences of researchers with indigenous tracking experts from around the globe, expounding on how archaeological sciencecan benefit from the ancestral knowledge.

This book will be of interest to professional archaeologists, graduate students, ecologists, cultural anthropologists and laypeople, especially those focussing on hunting-gathering and pastoralist communities and who appreciate indigenous knowledge.

Andreas Pastoors studied Prehistoric Archaeology and from there he successfully researched questions concerning the Middle Palaeolithic and the Upper Palaeolithic art. Since the late 1980s he has been working in the Volp Caves (Tuc d'Audoubert, Les Trois-Frères and Enlène), which are outstanding testimonials worldwide. Today he is the research director in these caves.

Since 2015 he is working at the FAU in Erlangen-Nuremberg as a lecturer and researcher. Among the many excavations and research projects he has led, the co-leadership of the project combining indigenous knowledge with archaeology, "Tracking in Caves" is notable.

He publishes his research promptly, which has led not only to a rapid dissemination of the results, but also to an impressive list of publications. In addition to many articles in high-ranking international journals, he has also repeatedly published monographs, which are still considered "great" works within the discipline, since they deal intensively with a specific topic. In addition to his dissertation and habilitation, the genre of sustainable publications, which will certainly retain their value decades after their publication, includes the three fundamental books on the Volp Caves which he co-edited, as well as a number of other conference proceedings published under his direction.

Tilman Lenssen-Erz has a background in African Studies and in Prehistoric Archaeology from which he developed a specialization in African rock art, particularly in Namibia and the Eastern Sahara. Since 1986 he is head of rock art research at the African Archaeology at the University of Cologne, since 2012 he leads the open online African Archaeology Archive Cologne. Besides projects in research data management he is also co-leader of two projects combining indigenous knowledge with archaeology, "Tracking in Caves" and "Indigenous Knowledge and Archaeoinformatics". His research always aims at cooperation with and training of local communities for capacity building.

He has published widely on rock art research with a focus on theoretical and methodological aspects, but also compiling and editing the unique six-tomed catalogue series "The Rock Paintings of the Upper Brandberg".