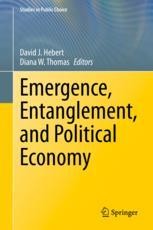 This volume is intended to serve as a review of the “next generation” of political economy scholars in what can be called the “Wagnerian” tradition, which traces its roots to Buchanan and De Viti De Marco in the 1930s, who argued that any decision that results from a political entity must be the product of individual decision makers operating within some framework of formal and informal rules. To treat these decisions as if they were the product of one single mind, or even simply the additive result of several decisions, is to fundamentally misunderstand and mischaracterize the dynamics of collective action.  Today, Richard Wagner is among the most prominent theorists in analyzing the institutional foundations of the economy and the organization of political decision-making. In this collection of original essays, former students schooled in this tradition offer emerging insights on public choice theory, public finance, and political economy, across a range of topics from voting behavior to entrepreneurship.

David Hebert is an Assistant Professor of Economics and the department chair at Aquinas College. He holds a B.S. in Economics and Mathematics from Hillsdale College and an M.A. and Ph.D. in Economics from George Mason University. During graduate school, he was an F.A. Hayek Fellow with the Mercatus Center and a Fellow with the Department of Health Administration and Policy and also worked with the Joint Economic Committee in the U.S. Congress. Previously, he served as an Assistant Professor at Ferris State University in Big Rapids, MI and Troy University in Troy, AL, and was also a Fellow with the U.S. Senate Budget Committee, where he authored a comprehensive report on Federal budget process reform.

His area of expertise lies in public choice and public finance. Specifically, his research aims to address the question of why democracies around the world and throughout history systematically produce tax codes that are long, complicated, and contain numerous loopholes despite universal popular support for tax codes that are short, simple, and contain few (if any) loopholes. His work has appeared in numerous academic publications as well as popular outlets such as The Hill, The Daily Caller, The Ripon Forum, and Investor's Business Daily.

Diana Thomas is an Associate Professor of Economics and Director of the Institute for Economic Inquiry at the Heider College of Business at Creighton University.  Previously, she served as an Assistant Professor at Utah State University. A German native, she earned her Diploma in Business Administration from Fachhochschule Aachen and her B.S. in Finance from George Mason University. After gaining some experience as a junior portfolio manager at a mutual fund management company in Frankfurt, Germany, Dr. Thomas returned to George Mason University to complete her M.A. and Ph.D. in Economics. In her research, Dr. Thomas explores the unintended consequences of regulation and the role political entrepreneurs play in changing the rules that govern society. She has published in a number of academic outlets, including Public Choice, Kyklos, Applied Economics, the Southern Economic Journal, and the Journal of Banking and Finance.