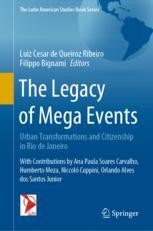 The Legacy of Mega Events

This edited volume offers a critical reflection on the failed experiment to redevelop the city of Rio de Janeiro according to the neoliberal strategy of entrepreneurial urban governance and mercantile regulatory transformations, which were leveraged by mega-sporting events.

The case of Rio de Janeiro is presented as an example of a failing global strategy for urban redevelopment, entrepreneurial urban governance and the realization of mega-events. This book aims to present the real and critical state of the legacies of such mega-events. It shows how instead of the promised economic redemption, Rio is experiencing a severe economic, political and social crisis, handling three observation perspectives: the first is the description of urban transformations and mega events, assessing the contradictions in the model for the intended urban development and taking into account historical factors both at local and national level; the second restricts on neighborhoods as case studies representing an ensign of a neoliberal urban transformation’ results; the third links city and citizenship focusing tensions and inconsistencies and opening up a perspective on the importance of fostering the concept of citizenship, including actions, movements and initiatives that express the resistance and struggles around a possible new destination for Rio de Janeiro.

General (Scientific) Editors: Luiz Cesar de Queiroz Ribeiro and Filippo Bignami
Co-Editors: Ana Paula Soares Carvalho, Humberto Meza, Niccoló Cuppini and Orlando dos Santos Junior
Luis Cesar de Queiroz Ribeiro, Professor of Regional and Urban Planning Institute of Federal University of Rio de Janeiro and Nacional Coordinator of Science and Technology Nacional Institute Observatorio das Metropoles, Brazil. He holds a PhD in Architecture and Urbanism by the Universiy of São Paulo, USP and Master in Economic and Social Development by the Université Paris 1 Pantheon-Sorbonne, Coordinates the National Institute of Science and Technology, INCT Observatório das Metrópoles: a research network involving comparative studies in 16 Brazilian metropolises and 100 mains researchers around territory, social cohesion and governance issues. His research area are metropolitan, intrametropolitan dynamics and the national territory, socio-spatial dimension of the exclusion / Integration in the metropolis, Urban governance, citizenship and management of the metropolis. Editor of Cadernos Metrópoles and e-metropolis magazines. Prof. Luiz Cesar de Queiroz Ribeiro previously edited the book "Urban Transformations in Rio de Janeiro" which was published by Springer in 2017.
Filippo Bignami holds a PhD in Political and Social Sciences. He is senior researcher and lecturer at the University of Applied Sciences of Southern Switzerland, Department of Economics, Health and Social Sciences (SUPSI-DEASS) - LUCI (Labour, Urbanscape and CItizenship) research area. He has been external scientific consultant for UN-ILO International Labour Organization, project visiting professor at the Asia-Europe Institute, State University of Malaya, Kuala Lumpur, Malaysia and senior researcher at Swiss Federal Institute for Vocational Education and Training. His main scientific interest and expertise is in citizenship social and political theories and applied studies on citizenship policies and education.
Ana Paula Soares Carvalho is assistant professor at the Department of Social Sciences of the Pontifical Catholic University of Rio de Janeiro (PUC-Rio) and coordinates the Social Sciences project of PUC-Rio's Institutional Program for Teaching Initiation Scholarships, PIBID. Has experience in the areas of Urban Sociology, Sociology of Law and Political Sociology and Methodology and Practice of Sociology Teaching. She holds a PhD in in Sociology from the Institute of Social and Political Studies, IESP-UERJ and master's degree in Sociology from the University Research Institute of Rio de Janeiro.
Humberto Meza is researcher in the National Institute of Science and Technology, INCT Observatório das Metrópoles within the Institute of Urban and Regional Planning and Research (IPPUR) of Federal University of Rio de Janeiro. He holds a PhD in Political Science by the University of Campinas (UNICAMP), in the field research of Collective Action, Social Movements and the interaction with political institutions. Was researcher at the Brazilian Research Center (CEBRAP) in Political Participation and Collective Action.
Niccolò Cuppini is researcher at the University of Applied Sciences of Southern Switzerland in the LUCI (Labour, Urbanscape and CItizenship) research area. His researches connect urban studies, history of political thought and critical logistics. He is in the editorial board of Scienza&Politica. He is part of the Into the Black Box research group, he collaborates with the Academy of Global Humanities and Critical Theory and he is working in many international research projects in Europa, Africa and Latin America.
Orlando Alves dos Santos Junior holds a PhD in Urban and Regional Planning by the Federal University of Rio de Janeiro (2000) and master in Urban Planning by the same university. He’s currently Director and professor of Urban and Regional Planning and Research Institute of Federal University of Rio de Janeiro (IPPUR/UFRJ). He also is a researcher of the Observatorio das Metropoles. His research experience is around Sociology, focusing on Urban Sociology, acting in the following issues: democracy, citizenship, urban planning, social participation and public management.