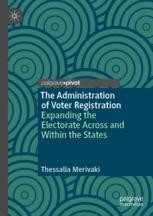 The Administration of Voter Registration

Expanding the Electorate Across and Within the States

This book examines the dynamics behind shifts in voter registration rates across the states and adopts a framework of collaborative governance with election administration at its center. The book starts by introducing readers to the “voter registration gap,” an aggregate measure of variance in voter registration, and demonstrates how it fluctuates between federal elections. To explain why this variance exists, the author examines the relationship between federal reforms, such as the National Voter Registration Act (NVRA) and the Help America Vote Act; and state-level reforms, such as Online Voter Registration. Thessalia Merivaki argues that the weak relationship between the two is not surprising, since it hides dramatic variations in administrative practices at the local level, which take place in shorter intervals than the most frequently used two-year estimates. In closing, she shows that challenges to successfully registering to vote persist, largely because of how, when, and where eligible citizens have to register.

Show all
About the authors
Thessalia Merivaki is an Assistant Professor of American Politics in the Department of Political Science and Public Administration at Mississippi State University, USA. Her works on voter list maintenance and provisional ballots have been published in Political Research Quarterly, American Politics Research, State Politics a nd Policy Quarterly, and Social Science Quarterly.
Show all
Reviews

“In The Administration of Voter Registration, Merivaki unpacks one of the most contentious aspects of the American election system, addressing processes, rules, behavior, and results in great detail. This is a must-read for students and scholars, advocates, reporters, and policy makers interested in truly understanding the nuance behind this aspect of elections.”

“Registering to vote is, as Merivaki points out, a ‘highly complex and error-prone’ process. Merivaki skillfully navigates multiple layers and levels of government—and data—to provide a clearer portrait of the strengths and weaknesses of the system. Policymakers should take her research seriously when generating ideas to improve elections all over the United States. She demonstrates a vast knowledge of the voter registration system in the United States and chooses examples to analyze carefully. Scholars, policymakers, and election officials alike can learn important details about the registration process from her careful analysis. Merivaki is a rising star in the study of Election Science and in the study of voter registration more generally. She has made an important contribution to maintaining and increasing Americans' right to cast a ballot. She clearly shows that not just the rules about voter registration matter, but also how election officials administer those rules.”

“With original data and fresh insights, Merivaki offers academics—and more importantly, practitioners and election administrators—a framework of collaborative governance to help us better understand the uneven dynamics and lack of uniformity in voter registration efforts across the American states. Due to institutional barriers and a lack of federal oversight the past two decades, many eligible citizens are not registered to vote, raising serious questions about the access and equity of the franchise in the United States. Merivaki makes a convincing case that though states have adopted multiple reforms to register voters—including online voter registration, automatic voter registration, and even Election Day registration—without partnerships with non-governmental actors, many states (and local jurisdictions) are unable to keep pace with the demands of registering eligible voters. Scholars, policy advocates, and election administrations all will benefit from Merivaki’s timely research.”