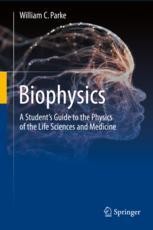 This comprehensive and extensively classroom-tested biophysics textbook is a complete introduction to the physical principles underlying biological processes and their applications to the life sciences and medicine. The foundations of natural processes are placed on a firm footing before showing how their consequences can be explored in a wide range of biosystems. The goal is to develop the readers’ intuition, understanding, and facility for creative analysis that are frequently required to grapple with problems involving complex living organisms. Topics cover all scales, encompassing the application of statics, fluid dynamics, acoustics, electromagnetism, light, radiation physics, thermodynamics, statistical physics, quantum biophysics, and theories of information, ordering, and evolutionary optimization to biological processes and bio-relevant technological implementations. Sound modeling principles are emphasized throughout, placing all the concepts within a rigorous framework. With numerous worked examples and exercises to test and enhance the reader’s understanding, this book can be used as a textbook for physics graduate students and as a supplementary text for a range of premedical, biomedical, and biophysics courses at the undergraduate and graduate levels. It will also be a useful reference for biologists, physicists, medical researchers, and medical device engineers who want to work from first principles.

”William Carleton Parke is a Professor of Physics, Emeritus, at The George Washington University. He became known for his versatility in both teaching and research, having made contributions in the fields of nuclear physics, biophysics, astrophysics, and quantum computing. He loved to answer questions from his students, and rarely referred to notes during lectures. Members of the GWU Physics Society gave him the title, "The Renaissance Man".

Growing up in Bethesda, Maryland, he was enthralled at an early age by how nature operates, devouring the Bethesda Library science section.  A number of Prof. Parke's early research publications were with Prof. Herbert Jehle, his Ph.D. thesis advisor in theoretical physics, but also in biophysics. He was able to spend summers doing graduate research at Stanford and the University of Colorado. After receiving a PhD in theoretical physics, he became a National Academy of Sciences-National Research Council postdoc at the National Bureau of Standards, Radiation Division. He returned to GWU in 1969 as an Assistant Professor.

During his first years on the faculty, Prof. Parke worked with his close colleague Prof. Donald R. Lehman. They were the first to calculate the beta decay lifetime of helium-six, and to derive the shell-structure of a nucleus, both from underlying three-body forces. These were the days (1970's) when the massive algebraic reduction involved had to be done by hand rather than by computer.

In 2002, graduate student Alaa Ibrahim and Prof. Parke, together with collaborator Jean Swank and others at NASA-Goddard Space Flight Center, got into the news for their observational discovery of a magnetar, a strongly magnetized neutron star. Prof. Parke later helped found the GW Astrophysics Group, inspired and directed by Prof. Kalvir Dhuga and including Prof. Eskandarian and Prof. Leonard Maximon. Prof. Parke also became a founding member of the GW Center for Quantum Computing, Information, Logic, and Topology.

In the early 1970's, Prof. Parke designed an intermediate course covering physics in medicine and biology. Prof. Parke taught the course for the next thirty seven years. During the same years, he taught most of the offerings of the Department of Physics and Astronomy at both the undergraduate and the graduate level, and co-taught a course called Science and Values and another called Astrobiology.

He has been principal investigator or co-principal investigator on about two dozen research grants in the fields of biophysics, nuclear physics, astrophysics, radiation physics, and quantum computing, and has published more than four dozen refereed papers and over fifty other papers and talks across all of these subjects, as well as co-authored a book on astronomy and was co-editor for a book about George Gamow.

His greatest pleasures in life come from his family, while his highest contribution he says has been helping to develop in young minds an appreciation of how exquisite nature can be, and that the quest for understanding is among the most worthy of all endeavors.”