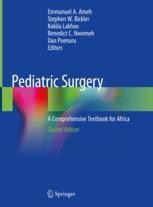 A Comprehensive Textbook for Africa

The second, fully updated edition of this book applies and contextualizes up-to-date information on pediatric surgery for low and middle-income countries (LMICs). The book is organized in general anatomic and thematic sections within pediatric surgery, such as urology, oncology, orthopedics and gastroenterology and includes chapters addressing the unique challenges and approaches for pediatric surgery in low-resource settings. Each chapter has dual authorship LMIC author providing context-specific insights and authors from high-income countries (HICs) contributing experience from well-resourced settings.

Written in a reader-friendly format, this book has a uniform structure in each chapter, with introduction, demographics, etiology, pathophysiology, clinical presentations, investigations, management, outcome, prevention, ethics, evidence-based surgery and references. This comprehensive volume fills the gap between up-to-date pediatric surgical scholarship and knowledge developed and applied in HICs, and the practical needs of practitioners in low-resource settings.

Emmanuel A. Ameh is Professor of Paediatric Surgery and Consultant Paediatric Surgeon at the National Hospital, Abuja, Nigeria. He was formerly Professor  at the Ahmadu Bello University & Consultant Paediatric Surgeon to the Ahmadu Bello University Teaching Hospital, Zaria, Nigeria. He obtained his medical degree from the Ahmadu Bello University, Zaria in 1989 with honors. He undertook surgical training at the Ahmadu Bello University Teaching Hospital, Zaria, Nigeria, subspecializing in Paediatric Surgery. He spent varying periods as Travel Fellow to Children’s Hospital of Pittsburgh, Children’s Hospital of New York, St. James’s University Hospital, Leeds (minimal invasive surgery and paediatric urology) and Great Ormond Street Hospital for Children, London, United Kingdom. Dr. Ameh has published over 190 papers in several journals around the world. He has edited 2 books and written several book chapters on aspects of surgical care of children. Over the years, Dr. Ameh has been actively involved in the development of educational programmes and training activities of the West African College of Surgeons, Association of Paediatric Surgeons of Nigeria and Pan African Paediatric Surgical Association. He was a Commissioner for the Lancet Commission on Global Surgery where he served as Lead for the workforce, training and education working group. He was an expert participant of the Fourth Meeting of the WHO Global Initiative for Emergency and Essential Surgical Care, where he served as vice chair of the advocacy working group. More recently, Dr. Ameh is a member of the core organizers for the Global Initiative for Children’s Surgery and he led the recently concluded National Surgical, Obstetrics, Anaesthesia and Nursing  Plan for Nigeria. He has been at the forefront of championing the cause for improvements and advancement in children’s surgical care and training of paediatric surgeons in Africa and Low and Middle-Income Countries.

Stephen W. Bickler is Professor of Surgery and Pediatrics at the University of California San Diego and Attending Pediatric Surgeon at Rady Children’s Hospital (San Diego, CA USA).  Prior to joining the University of California San Diego, he was the Consultant Pediatric Surgeon at the Royal Victoria Hospital in Banjul, The Gambia. Dr. Bickler has served as a consultant for the World Health Organization on surgery in low-income countries and has published extensively on strategies for improving the surgical care in settings of limited resources.  He has published over 100 manuscripts in peer-reviewed journals, edited two pediatric surgery textbooks for sub-Saharan Africa, and written many book chapters on a variety of surgical topics.  Dr. Bickler was a Co-Principle investigator on a five-year NIH funded project to improve surgical care in rural areas of Mozambique, a contributing author to the 3rd Edition of Disease Control Priorities (World Bank) and co-author of the Lancet Commission on Global Surgery.  His research interests include surgical epidemiology, the role of surgical care in primary health care systems, and economics of surgical care in settings of limited resources.   Dr. Bickler received his medical degree from the University of California Irvine, College of Medicine and a Diploma of Tropical Medicine & Hygiene from the University of London.  He completed his surgical residency at Oregon Health & Science University and his pediatric surgery fellowship at Children’s Mercy in Kansas City, Missouri, USA.

Kokila Lakhoo trained in general surgery in Johannesburg, South Africa and had her specialist training in paediatric surgery at the Red Cross Memorial Hospital in Cape Town, in South Africa and Great Ormond Street Children’s’ Hospital in London, United Kingdom. She has worked as a consultant paediatric surgeon and senior lecturer at Baragwanath Hospital and University of Witwatersrand, Johannesburg, South Africa, Postgraduate Medical School Hammersmith Hospital and Imperial College, University London, United Kingdom. She presently works at the children’s hospital, Oxford and university of oxford, United Kingdom as consultant paediatric surgeon and Professor. She has developed paediatric surgery in Tanzania over the past 16 years and has continued collaboration with her Tanzanian partners. She regularly runs neonatal skills courses in Africa for the past 10 years. Recently she has partnered with Royal College of Surgeons of England and India to develop skills in children’s surgery in district general hospitals. Kokila has published 202 journal articles, edited 3 books, written 82 book chapters and serves as editor for 3 journals. She is actively involved in the activities of Pan African Association of Paediatric Surgeons and the International Affairs Committee of British Association of Paediatric Surgeons. She presently chairs the Global Initiative for Children’s Surgery.

Benedict C. Nwomeh is Professor of Surgery and Pediatrics at The Ohio State University. He obtained his medical degree from the University of Lagos in Nigeria. His general surgical training began at the Lagos University Teaching Hospital and continued in the United Kingdom at various centers including the teaching hospitals of the University of Manchester and University of Wales. Subsequently, he completed a general surgery residency at the Medical College of Virginia, Richmond, VA with an additional 2 years as Research Fellow in the Laboratory of Tissue Repair. He did his pediatric surgery fellowship at the Children’s Hospital of Pittsburgh, and then joined Nationwide Children’s Hospital, Columbus, OH in 2003 as Attending Pediatric Surgeon. At Nationwide, he serves as Director for Pediatric Surgery Fellowship Training Program, the Director of Surgical Education, and Surgical Director of the Center for Adolescent and Pediatric Inflammatory Bowel Diseases. Also, he is the Director of Global Surgery at the Ohio State University Wexner Medical Center. He currently serves as chair of the NIH/NLM Literature Selection Technical Review Committee (LSTRC), chair of the Committee on Global Academic Surgery at Society of University Surgeons (SUS), and chair of the Informatics and Telemedicine Committee of the American Pediatric Surgical association (APSA). He has made more than 120 national or international scientific presentations and been author on more than 130 peer-reviewed journal articles, books, and book chapters.

Dan Poenaru is a pediatric surgeon working in Canada and Africa. Following medical school studies in Toronto, he trained in general surgery at McGill University, then in pediatric surgery at the Université de Montréal. He has earned a Masters in Health Professions Education (University of Illinois in Chicago), and a PhD in Pediatric Surgery (Erasmus University, Rotterdam). He has practised academic surgery for 10 years in Kingston, Canada, 8 years in Kijabe, Kenya, and 2 years in Addis Ababa, Ethiopia. He now divides his professional time between Montréal, Canada, and various sites in Africa. His current roles include clinical director of Bethany Kids Africa (a faith-based organization providing holistic care to children with surgical disabilities), dean of the Faculty of Medicine of Universite Shalom Bunia (DRC), and education consultant to the Edna Adan University School of Medicine (Hargeisa, Somaliland). He is associate professor of Surgery at McGill University (Montreal, Quebec), adjunct professor of Surgery at Queen’s University (Kingston, Ontario), and holds academic positions at McMaster University and University of British Columbia. He is the recipient of the 2014 Teasdale-Corti Humanitarian Award of the Royal College of Physicians and Surgeons of Canada and the 2015 ACS/Pfizer Surgical Humanitarianism Award of the American College of Surgeons. His areas of interest are global burden of surgical disease, chronic pediatric surgical disabilities in Africa, faith issues in clinical practice, and global surgical education.