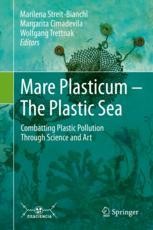 This book, written by a multidisciplinary team of authors comprising scientists, artists and communicators, explores one of the most pressing issues of our time – the menace plastics pose to marine environments and organisms. It takes readers on a journey that begins on the beaches of Galicia, where the beach litter formed the starting point for an exhibition that combines art and science to alert the audience to the urgent need for action. The journey culminates with a short “plastic story”, which reveals a disturbing vision of the future significance of plastics for humans, and an example of how comics can deliver information to a younger audience. Along the way there is plenty of fascinating science, such as insights into the impacts of plastics and microplastics; the new marine ecosystem, known as the “plastisphere”; and the current status of the oceans, from the Arctic to the Mediterranean. The book also explores the historical developments; sustainable solutions, including the use of circular economy methodologies; and protective measures, like those being tried in China and the Far East. Lastly, it describes the role played by rivers as transport vectors for plastic, with special reference to the Danube, and to complete the picture, since most of the plastic is of terrestrial origin, it investigates problems related to microplastics in soils.

Marilena Streit-Bianchi was born in Rome (Italy). She received a doctorate in Biological Sciences from the University of Rome and joined CERN, the European Organization for Nuclear Research, in Geneva (Switzerland), in 1969.  She has been a pioneer in the study of high-energy particles produced by accelerators for cancer treatment. She has held managerial positions in the area of safety training and technology transfer and is currently a senior honorary staff member at CERN, actively engaged in art and science as a book editor and curator of exhibitions in Europe and Mozambique.

Margarita Cimadevila The artist who was born in Sada (A Coruña, Spain), graduated in Chemistry. She then worked as a secondary school science teacher for the Government of Galicia for thirty years, nine of them as director. Her artistic work combines science and art on topics such as the particle physics at CERN, women in science, gender equality and eco art. She is president of the organization ARSCIENCIA and a member of AMIT (Spanish Association of Women Researchers and Technologists). Her work has been exhibited in Europe, America and China.

Wolfgang Trettnak was born in Graz (Austria) and received a PhD in Chemistry from the University of Graz. He undertook applied research on sensors and biosensors for several years and published a number of scientific articles. In 2002 he became a freelance artist, and his work, which comprises painting, object art, and installations, has been exhibited in Europe, America, and China. His work links science with art on subjects such as bionics, electronics, luminescence and environmental topics.