In honor of the UN Human Rights Day on December 10th, 2018  we invite you to browse the collection from our programs in Law and Social Sciences.

Browse books, journals, featured book chapters and articles presenting relevant research across the topic "Human Rights". They were chosen with the UN spirit of this day in mind: "Stand up for equality, justice and human dignity." #standup4humanrights

Are you interested in publishing your  research? Reach out to our publishing editors. Your ideas are welcome! 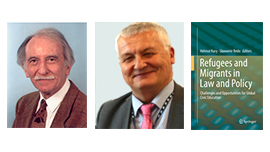 Featured Book
Refugees and Migrants in Law and Policy

Refugees and migration are not a new story in the history of humankind, but in the last few years they have again been a topic of intensive and contentious discussion in politics. This book addresses the question of the rights and responsibilities involved in migration from the academic and practical perspectives of experts in the field of social sciences and welfare, and charts the way forward to 2030 and beyond, and also beyond the paradigm of political correctness.

Read the interview with our book editors on the challenges and opportunities of migration:

In your view, why is it most important to look at migration as a challenge for both migrants and host societies? Why does the human treatment of refugees and migrants concern societies as a whole?

Migration is inevitable. It may be perceived as ominous but it is a fact of life. Either we see it as a disadvantage or we “turn” the perceived disadvantage into an advantage. We think that there is not enough reciprocity involved in the work for integration, as if the Golden Rule has been wiped out in our minds by fear and distrust of one another. In his inaugural address, the 35th US President John F. Kennedy emphasized the importance of civic action: “Ask not what your country can do for you – ask what you can do for your country.” Nowadays he might put it this way: “We, that is natives and migrants alike, we all should respectively ask not what others can do for us but what we can do for them.” We argue for the pragmatic result-oriented means and ways that focus on active, participatory and democratic involvement of migrants and refugees in enhancing their chances and those of a new homestay as a place of the right living, whether one is local or incoming. There should be mutually reinforcing benefits for all.

Why did you decide to write a book on refugees and migrants and what makes the book so special?

During the last three to four years, the topic on refugees and migrants has been discussed more and more on a global basis. There are  an increasing number of people, especially (but not limited to)  Africa who leave their home countries due to terrible wars and a decline in living conditions, for example due to climate change. The succeeding generation will live in a different world than us. Their basic human right may be the right to live in a less destructive habitat. Refugees are not a new phenomenon:  since beginning of time, people have left their home countries. In Germany and Austria, where we as the Editors of the book live, we have experienced a strong influx of refugees beginning in 2015. This is the impact of liberal human rights policies. The more refugees immigrate, the more critical is the topic of human rights and safety, of the right to life and the right to dignity. It is very important to inform people about the topic and to have qualitative discussions, not forgetting human rights. Some countries, like Germany, need immigration in order to fill specialist job positions and contribute to the economic development of the country. The more people are well informed about the background and outcome of the question why migration is beneficial, the more they understand its eventual positive function for the economy.

What were your findings with regard to Refugees and Human Rights?

In the epilogue of the book three human rights are singled out: to safety, to life and to dignity. They are constitutive to orderly, safe, regular and responsible migration. We are speaking about the above rights, also as responsibilities of and in host countries, and of migrants as individuals, members of family, members of an interethnic community. Human rights and duties in safeguarding life and making it worth living, in mutual safety, and by strengthening and protecting migrants’ dignity in culturally questionable cases – that is the message at the end of our book ensuing from the United Nations perspective.

Tell us a bit about your book “Refugees and Migrants in Law and Policy”.

The book includes 35 chapters written by 60 contributors from many countries. The book consists of five parts. The authors discuss the situation in their own countries, about the public debates on the migration issues, the background of migration, problems of integration of the immigrants, what should be done to reduce maladaptation. The role of volunteers in the host countries is discussed and other measures to help to integrate the newcomers. The results of a big research project done in Germany by one of the editors (H. Kury) and coauthors informs the reader about the psychological problems, like Posttraumatic Stress Disorder set against the background of very often terrible experiences in the home countries and on their flight and what should be done to help the persons to reduce their mental health issues. Specific topics are discussed like the question: do more refugees increase the crime rate in a country or the fear of crime in guest countries? Topics like different language, strong differences in attitudes and religious beliefs are discussed as are how these topics can be addressed. Authors from the United Nations and other experts present overviews of what is both being done and can be done by not only this intergovernmental organization, but also by society in general. Migration is not a problem to be solved, it is a reality to be managed. The question of refugees and migrants should be discussed in law and policy that not only acknowledges this, but pragmatically and paradigmatically implements the United Nations recommendations, including the 2030 Sustainable Development Agenda and the New York Declaration for Refugees and Migrants.

The Universal Declaration of Human Rights turns 70 this year, it was adopted by the United Nations General Assembly on 10 December 1948. Article 14 warrants “the right to seek and to enjoy in other countries asylum from persecution.” How is this right implemented and what needs to be done?

That warranty emerged as an outcome of refugee problems during and after the Second World War. It is fundamental. Now the number of displaced people (some 40 million) surpassed the World War II numbers. As of this late 2018, the number of refugees alone is some 25 million, plus the number of asylum seekers about 3 million, so altogether over 68 million. So if we are talking about 25 million of refugees who may not qualify under the 1951 convention, then we have to talk about the challenge to the existing international legal order and how it will influence the forthcoming Global Compact for Safe, Orderly and Regular Migration.

In the foreword of the book, Francois Crépeau, the former United Nations Special Rapporteur on the Human Rights of Migrants, writes that “the current feeling that a ‘migration crisis’ is underway […] will not be overcome until a convincing vision and narrative regarding mobility and diversity will take its place and be supported by the political class […]”. Can Global Civic Education help to overcome this feeling and to encourage collective solidarity within societies as a whole? If so, which actions need to be taken?

Global civic education is needed from cradle to grave. Especially in ages 0 to 7 it may make a lasting impact on the minds of kids. We need to expand universal preschool education, we need one UN sustainable goal appropriately pursued: equality among children in multi-ethnic boys/girls environment – through partaking in joint events, “ideas” and “projects”. We should teach them rational thinking about the consequences of their acts and about the modern meaning of words like “property” – no woman is a “property” of a man.

The Executive Director of Human Rights Watch stated “that if there is a crisis, it is one of politics, not capacity”. Do you agree? If so, how can Global Civic Education and other measures help to overcome the crisis?

The absorption capacity of immigrants has its own preconditions, levels and intricacies, at least as immigration is concerned (not the flow of refugees). But there is no arithmetic key with which this capacity will be assessed globally, let alone throughout Europe. Despite the crisis in politics, even countries which created it and officially do not subscribe to the UN laws and policies for migrants, accept them as a part of orderly, safe and regular migration. But we are not aware of their experience as far as “responsible” migration is concerned. It looks that this is not a full sense of integration envisioned by the UN law and policy.

How do you hope your research will impact the future?

The book presents clearly the “problems” refugees create in guest countries but shows also the positive effect they very often establish. The borders between countries diminish more and more, also because of modern communication structures and better chances to travel. The topic of migration and refugees is not a temporary one but will have even a greater impact in the future. So a substantial discussion of the topic is very important and this book is published to provide a background covering different international viewpoints. The more rational the discussions that will develop, the better the solutions that can be found. We hope that countries that “stay behind” – that is countries which distance themselves from the Global Compact proposal, and the ongoing already policies for improving multicultural integration and crime prevention, will benefit from those other countries which move on, how to advance inclusiveness while making justice “strong” – as postulated by the 2030 UN Sustainable Development Agenda.

Featured chapter: Leadership in the Quest for Protection

Enjoy free access to all featured book chapters until January 10, 2019

Read below featured articles for free until January 10, 2019. Open access articles are freely readable on a permanent basis.

Read current Virtual Issue on:  The Dimensions and Complexity of Human Rights

Constitutional Markers of Authoritarianism
<Hague Journal on the Rule of Law>

It’s Right, It Fits, We Debated, We Decided, I Agree, It’s Ours, and It Works: The Gathering Confluence of Human Rights Legitimacy
<Law and Philosophy>

Right, Crime, and Court: Toward a Unifying Political Conception of International Law
<Criminal Law and Philosophy>

The Court of Justice at the Crossroads: Clarifying the Role for Fundamental Rights in the EU Copyright Framework
<IIC - International Review of Intellectual Property and Competition Law>

To bribe or not to bribe: human rights issues that should factor into decision making process
<Jindal Global Law Review>

Your research is welcome. Publish with Springer.

Are you ready to publish? Be it a book or journal article, our Editorial Teams can help you
select the best option for your research.

Discover your benefits as a Springer author

SharedIt is now available for Springer journals. Learn more about how to share journal articles with anyone.

Knowledge matters. Over 10 million scientific documents at your fingertips.