The Internet of Things

Antonio Liotta, Editor in Chief of the Springer Book Series "Internet of Things" gives us some insight on what the IoT is, where it is going, and what we can expect:

Springer: What is the Internet of Things?
Antonio: The Internet of Things is the next Internet. It extends the reach of connectivity much beyond computers and phones to virtually any object that has a chip and a radio interface. IoT gathers data from electronic sensors (such as those embedded in cars, drones or wearable fitness gadgets). It makes it possible to orchestrate multiple systems that affect each other (such as traffic and energy management in a “smart” city) because, beyond sensing and collecting data, it can act upon the physical world by sending control signals to actuators and robots. The reason why it is so important, and why we need to get it right is that IoT virtualizes the physical world, enabling the cyber-physical connection.

Springer: What is the biggest impact that the IoT will have on the future?
Antonio: IoT allows the digitization of everything, from your sleep pattern to the most complex factory assembly line, from farms to mega cities. By connecting more things and correlating more data, IoT creates new opportunities to transform businesses in any sector and improve our health and security through data analytics and artificial intelligence. The prospects of process optimizations, energy savings, reduced pollution, and improved health resulting from IoT technologies mean that IoT has the potential to transform deeply businesses and society.

Springer: What is the biggest threat to society by the IoT?
Antonio: Like all data-hungry systems IoT has a tendency to expose sensitive personal information. If you think that we have a fairly limited control over our personal data now, imagine what a fully connected world with ubiquitous sensing and remote actuation will look like.

Springer: What is the biggest threat to the success or future of the IoT?
Antonio: IoT is expected to grow the Internet by three orders of magnitude within just a few years. Engineers and computer scientists are well aware of the huge challenges this entails. Based on today’s technology, there is simply not enough wireless spectrum to connect trillion of things. We don’t yet know how to generate and distribute sufficient energy to keep all those things on. And how will we store and process the vast volume of IoT data (currently estimated to top 44 Zettabytes annually, that’s 44 trillion gigabytes)? I think that before the IoT can express its full potential, major scientific breakthroughs are required, particularly in low-power communications and distributed machine learning.

Springer: You have been the editor of the “Internet of Things” Book Series since 2014, how has the IoT landscape changed?
Antonio: The general vision of the transformative potential of IoT hasn’t changed, but technologies have evolved considerably in the meantime. We can now connect things more easily, gather data from most physical processes, and aggregate information from heterogeneous sources. We can already see real-world examples of small-scale IoT systems in factory automation, autonomous driving, smart homes, and e-health, to mention but a few. The business models behind IoT are established around the principles of cloud-assisted IoT, where devices capture data that is then conveyed to cloud services. In 2014 IoT was mainly about the enabling devices and connectivity. Today, IoT is a distributed data science problem.

Springer: In your opinion, have we reached the height of the IoT or is the best yet to come?
Antonio: There are exciting times ahead. Today we see a growing number of isolated IoT silos that do not inter-operate. They keep data confined within proprietary domains. So it’s still difficult to combine IoT data from different systems, to create truly innovative services. A good example is health monitors. There are so many of them, but the competition among device manufacturers makes it difficult to develop a common health repository that could be used to gain new medical insights or improve preventive medicine. There is, of course, the major issue of ethical use and fusion of sensitive data, which applies to the whole digital world but is particularly problematic in IoT systems.

Springer: What will come after the IoT?
Antonio: IoT is a concept (everything connected) and an enabler (an enhanced cyber-physical Internet). As it makes more data available to AI (artificial intelligence) systems, IoT will expand the scope and power of AI. It will also allow computers to remotely control the physical world in ways that we can’t yet imagine. From the academic perspective, research in data science will continue to grow in interest and importance. At the societal and technological level, we will have to address ethical questions, not only about privacy, but also about how much authority and autonomy we wish to hand over to the intelligent IoT.

Antonio Liotta is a Professor of Data Science and the founding director of the Data Science Research Centre, University of Derby, UK. Industry partnerships are central to his role: he is committed to harnessing complex networks, machine learning and artificial intelligence to address problems and improve efficiency for the benefit of organizations across the public and private sectors.
With six patents and more than 270 publications to his name, he is at the forefront of influential research in network and data science, focusing in particular on the Internet of Things, Smart Cities and smart sensing.
Professor Liotta’s academic career has taken him throughout Europe. After gaining his master’s degree in Milan, he completed his PhD in Computer Science at University College London (UCL) and progressed to a range of research and lecturing roles in the Netherlands and the UK.
One of the hallmarks of Professor Liotta’s work is international research collaboration. He is Director of the Joint Intellisensing Lab, an experimental facility with nodes in the UK, Netherlands, Italy, Australia and China. He also serves as a Guest Professor at Shanghai Ocean University.
In addition, he is Editor-in-Chief of the Springer Internet of Things book series; author of the book Networks for Pervasive Services: six ways to upgrade the Internet (Springer, 2011); and associate editor of the Elsevier Information Fusion Journal, among several other publications.

Back to the Internet of Things 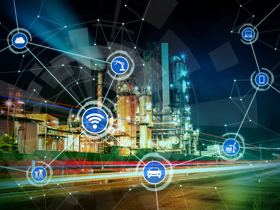