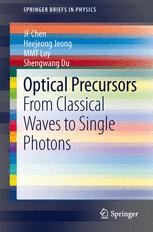 From Classical Waves to Single Photons

Ever since Einstein’s special relativity in 1905, the principle of invariant light speed in vacuum has been attracting attention from a wide range of disciplines. How to interpret the principle of light speed? Is light referred to continuous light, or light pulse with definite boundaries? Recent discovery of superluminal medium triggered vigorous discussion within the Physics community. Can communication via such “superluminal channel” break the speed limit and thus violate causality principle? Or, will a single photon, which is not governed by classical laws of Physics, tend to break the speed limit? To solve these problems, this Brief  brings in Optical Precursors, the theoretical works for which started as early as 1914. This is a typical optical phenomenon combining wave propagation theory and light-wave interaction. Both theory and experimental works are covered in this Brief. The study of precursor verifies that the effective information carried by light pulses can never exceed the speed of light in vacuum- c. Further, through observation from nonclassical single photon source, the precursor rules out the probability of a single photon traveling with the speed, breaking the classical limit.

Professor Michael Loy earned both his BSc (1966) and PhD (1971) degrees at the University of California at Berkeley. He joined HKUST in 1993 as Professor of Physics and served as Dean of Science from 1998 to 2004. Before coming to HKUST, Professor Loy worked for more than 20 years at IBM's T. J. Watson Research Center in New York. He is a Fellow of the American Physical Society. He is also a member of the Optical Society of America. His main research interests include nonlinear optical propagation effects, two-photon coherent transients, nonlinear optical studies of surfaces, the state-selective studies of molecule-surface interactions. His recent work involves desorption of molecules from surfaces induced by femtosecond laser pulses.

Prof. Jiefei Chen obtained her PhD in Physics from the Hong Kong University of Science and Technology and is currently Professor in the Department of Physics at the East China Normal University. Her areas of interest are Atomic and Molecular Optics, Quantum optics, and Nonlinear Optics.

Dr. Heejeong Jeong is a Research Staff Member at the Samsung Advanced Institute of Technology in Yong-in, Korea. She received her Ph.D. degree from the Physics Dept. at Duke Univ., Durham, NC in 2006 for her study of the Optical Precursors using cold potassium atoms, under the supervision of Dr. Daniel J. Gauthier. She continued her research of Optical Precursors for two years at Thayer School of Engineering, Dartmouth College as a Postdoctoral Research Associate. In 2008, she joined Samsung Electronics (Suwon, Korea) and moved to SAIT to carry out research and development of next generation optoelectronic devices.