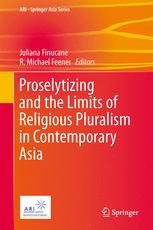 Proselytizing and the Limits of Religious Pluralism in Contemporary Asia

This volume brings together a range of critical studies that explore diverse ways in which processes of globalization pose new challenges and offer new opportunities for religious groups to propagate their beliefs in contemporary Asian contexts. Proselytizing tests the limits of religious pluralism, as it is a practice that exists on the border of tolerance and intolerance. The practice of proselytizing presupposes not only that people are freely-choosing agents and that religion itself is an issue of individual preference. At the same time, however, it also raises fraught questions about belonging to particular communities and heightens the moral stakes in involved in such choices. In many contemporary Asian societies, questions about the limits of acceptable proselytic behavior have taken on added urgency in the current era of globalization. Recognizing this, the studies brought together here serve to develop our understandings of current developments as it critically explores the complex ways in which contemporary contexts of religious pluralism in Asia both enable, and are threatened by, projects of proselytization.

R. Michael Feener is Research Leader of the Religion and Globalization Research Cluster at the Asia Research Institute, and Associate Professor of History at the National University of Singapore. Previously he taught at Reed College, and the University of California, Riverside. He has also held visiting professor positions and research fellowships at Kyoto University, École des Hautes Études en Sciences Sociales (Paris), the University of Copenhagen, The Doris Duke Foundation for Islamic Art (Honolulu), and the International Institute for Asian Studies (IIAS) in Leiden. Born in Salem, Massachusetts, he was trained in Islamic Studies and foreign languages at Boston University as well as in Indonesia, Egypt, and the Yemen. His books include Shari`a and Social Engineering: The Implementation of Islamic Law in Contemporary Aceh, Muslim Legal Thought in Modern Indonesia, Shiʿism and Beyond: ʿAlid Piety in Muslim Southeast Asia (with Chiara Formichi), From the Ground Up: Perspectives on Post-Tsunami and Post-Conflict Aceh (with Patrick Daly & Anthony Reid), Mapping the Acehnese Past (with Patrick Daly & Anthony Reid), Islamic Connections: Muslim Societies of South and Southeast Asia (with Terenjit Sevea), Islamic Law in Contemporary Indonesia: Ideas and Institutions (with Mark Cammack), and Islam in World Cultures: Comparative Perspectives.

Juliana Finucane received her Ph.D. in Religion from Syracuse University, and has worked in the Religion and Globalization cluster at the Asia Research Institute of National University of Singapore, Wells College, and Syracuse University. Her research areas include the globalization of Japanese new Buddhist movements, and she has done research with members of the Soka Gakkai in Singapore, Kuala Lumpur, Hong Kong, and the United States. In particular, she focuses on new forms of missionary activity in global and globalizing cities, the use of media to promote religious pluralism, and the relationship of freedom of the press and freedom of religion.