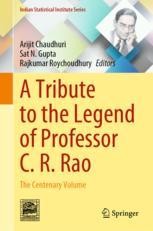 A Tribute to the Legend of Professor C. R. Rao

This book includes speeches given during five seminar sessions held in honor of Prof. C. R. Rao, on his 100th year, by the members of the Indian Statistical Institute Retired Employees Association. This book also contains a few write-ups touching on the diverse aspects of this august personality. The chapters pay tribute to Prof. C. R. Rao, the Padma Vibhushan awardee, by discussing his life and contributions to the field of statistics. The book also includes a chapter by the Abel Prize winner Prof. S. R. Varadhan who happened to successfully complete his Ph.D. under the guidance of Prof. C. R. Rao.

ARIJIT CHAUDHURI is Honorary Visiting Professor at the Applied Statistics Unit (ASU) at the Indian Statistical Institute (ISI), Kolkata, India, since 1st September 2005. Professor Chaudhuri holds a Ph.D. in Statistics in the area of sample surveys from the University of Calcutta, Kolkata, India, from where he also graduated. He worked as a postdoctoral researcher for two years at the University of Sydney (1973–1975), Australia. He retired as a professor from the ISI, Kolkata, India, on 31st August 2002, where he then continued to work as CSIR Emeritus Scientist for three years up to 31st August 2005. His areas of research include mean square error estimation in multi-stage sampling, analytical study of complex surveys, randomized response surveys, and small area estimation. In the year 2000, he was elected as President of the Section of Statistics for the Indian Science Congress and worked for the Government of West Bengal for 12 years as Committee Chairman for the improvement of crop statistics. He has also worked with the Government of India to apply sophisticated methods of small area estimation in improving state and union territory level estimates of various parameters of national importance. He has worked on various global assignments upon invitation, including visiting professorships at universities/statistical offices in the USA, Canada, England, Germany, the Netherlands, Sweden, Israel, Cyprus, Turkey, Cuba, and South Africa, from 1979 to 2009. He has successfully mentored 10 Ph.D. students and published more than 150 research papers in peer-reviewed journals, a few of them jointly with his students and colleagues. He is the author of 11 books on survey sampling.

SAT N. GUPTA is Professor of Statistics and Head of the Department of Mathematics and Statistics at the University of North Carolina at Greensboro, USA. He holds a Ph.D. in Statistics from Colorado State University, USA (1983), and a Ph.D. in Mathematics from the University of Delhi (1977). Earlier, he served as Professor of Statistics at the University of Southern Maine, USA. He has published over 130 journal articles and has several edited book volumes to his credit including one with Professor C. R. Rao. He has provided research guidance to students at all levels from undergraduate to doctorate, including 20 graduate students, 8 undergraduate students, and 10 Ph.D. students. His research has been funded by major US funding agencies like the National Science Foundation, National Institute of Health, Mathematical Association of America, American Statistical Association, and Robert Wood Johnson Foundation. Fellow of the American Statistical Association, Prof. Gupta has bagged several awards in his illustrious career, including the Senior University-wide Research Excellence Award; Senior College of Arts and Sciences Teaching Excellence Award at the University of North Carolina, Greensboro, USA; Outstanding Faculty Award and the Outstanding Teacher/Scholar Award from the University of Southern Maine, USA; Distinguished Service Award for the Cause of Statistics given by the North Carolina Chapter of the American Statistical Association; and the Sankhyiki Bhushan Award from the Indian Society of Agricultural Statistics. He is Founding Editor-in-Chief of the prestigious Journal of Statistical Theory and Practice (Springer) since 2007.

RAJKUMAR ROYCHOUDHURY is former Professor at the Physics and Applied Mathematics Unit of the Indian Statistical Institute, Kolkata. He holds a Ph.D. in Physics from the University of Durham, England (1970). He completed his M.Sc. in Applied Mathematics from the University of Calcutta, Kolkata, India, in 1965. He was awarded the President’s Gold Medal in 1963 for obtaining the highest marks among all B.Sc. students and went to England on a state scholarship for a higher education in 1966. His areas of research are quantum mechanics, plasma physics, nonlinear dynamics, and quantitative linguistics. After a stint with the West Bengal Education Service, Prof. Roychoudhury joined Indian Statistical Institute (ISI), Kolkata, in 1977. He retired from ISI in 2006 as Professor and Head at the Physics and Applied Mathematics Unit. He has visited universities and institutions around the world, including in Canada, Taiwan, China, and Europe, as a visiting scientist and an invited speaker. He has more than 250 publications in international journals of repute to his credit.