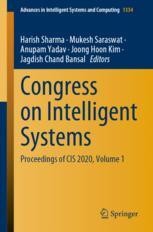 Harish Sharma is Associate Professor at Rajasthan Technical University, Kota, in the Department of Computer Science & Engineering. He has worked at Vardhaman Mahaveer Open University Kota, and Government Engineering College Jhalawar. He received his B.Tech. and M.Tech. degree in Computer Engineering from Government Engineering College, Kota, and Rajasthan Technical University, Kota, in 2003 and 2009, respectively. He obtained his Ph.D. from ABV-Indian Institute of Information Technology and Management, Gwalior, India. He is the secretary and one of the founder members of Soft Computing Research Society of India. He is a lifetime member of Cryptology Research Society of India, ISI, Kolkata. He is Associate Editor of “International Journal of Swarm Intelligence (IJSI)” published by Inderscience. He has also edited special issues of the many reputed journals like “Memetic Computing”, “Journal of Experimental and Theoretical Artificial Intelligence”, and “Evolutionary Intelligence”. His primary area of interest is nature-inspired optimization techniques. He has contributed to more than 65 papers published in various international journals and conferences. Dr. Mukesh Saraswat is Associate Professor at Jaypee Institute of Information Technology, Noida, India. Dr. Saraswat has obtained his Ph.D. in Computer Science & Engineering from ABV-IIITM Gwalior, India. He has more than 18 years of teaching and research experience. He has guided 02 Ph.D. students, more than 50 M.Tech. and B.Tech. dissertations, and presently guiding 05 Ph.D. students. He has published more than 40 journal and conference papers in the area of image processing, pattern recognition, data mining, and soft computing. He was the part of successfully completed DRDE funded project on image analysis and currently running two projects funded by SERB-DST (New Delhi) on Histopathological Image Analysis and Collaborative Research Scheme (CRS), Under TEQIP III (RTU-ATU) on Smile. He has been an active member of many organizing committees of various conferences and workshops. He was also Guest Editor of the Journal of Swarm Intelligence. He is an active member of IEEE, ACM, and CSI Professional Bodies. His research areas include image processing, pattern recognition, mining, and soft computing.
Dr. Anupam Yadav is Assistant Professor, Department of Mathematics, Dr. BR Ambedkar National Institute of Technology Jalandhar, India. His research area includes numerical optimization, soft computing, and artificial intelligence; he has more than ten years of research experience in the areas of soft computing and optimization. Dr. Yadav has done Ph.D. in soft computing from Indian Institute of Technology Roorkee, and he worked as Research Professor at Korea University. He has published more than twenty-five research articles in journals of international repute and has published more than fifteen research articles in conference proceedings. Dr. Yadav has authored a textbook entitled “An introduction to neural network methods for differential equations”. He has edited three books which are published by AISC, Springer Series. Dr. Yadav was General Chair, Convener, and a member of steering committee of several international conferences. He is Associate Editor in the journal of the experimental and theoretical artificial intelligence. Dr. Yadav is a member of various research societies.
Professor Kim, Dean of Engineering College of Korea University, obtained his Ph.D. degree from the University of Texas at Austin in 1992 with the thesis title “Optimal replacement/rehabilitation model for water distribution systems”.  Prof. Kim’s major areas of interest include optimal design and management of water distribution systems, application of optimization techniques to various engineering problems, and development and application of evolutionary algorithms. His paper which introduced the Harmony Search algorithm has been cited for more than 5,000 times according to Google Scholar. He has been the faculty of School of Civil, Environmental and Architectural Engineering at Korea University since 1993. He has hosted international conferences including APHW 2013, ICHSA 2014 & 2015, and HIC 2016 and has given keynote speeches at many international conferences including 2013, GCIS 2013, SocPros 2014 & 2015, SWGIC 2017, and RTORS 2017. He is a member of National Academy of Engineering of Korea since 2017.
Dr. Jagdish Chand Bansal is Associate Professor at South Asian University New Delhi and Visiting Faculty at Maths and Computer Science, Liverpool Hope University UK. Dr. Bansal has obtained his Ph.D. in Mathematics from IIT Roorkee. Before joining SAU New Delhi, he has worked as Assistant Professor at ABV-Indian Institute of Information Technology and Management Gwalior and BITS Pilani. He is Series Editor of the book series Algorithms for Intelligent Systems (AIS) published by Springer. He is Editor-in-Chief of International Journal of Swarm Intelligence (IJSI) published by Inderscience. He is also Associate Editor of IEEE ACCESSS published by IEEE. He is the steering committee member and General Chair of the annual conference series SocProS. He is the general secretary of Soft Computing Research Society (SCRS). His primary area of interest is swarm intelligence and nature-inspired optimization techniques. Recently, he proposed a fission–fusion social structure-based optimization algorithm, Spider Monkey Optimization (SMO), which is being applied to various problems from engineering domain. He has published more than 70 research papers in various international journals/conferences. He has supervised Ph.D. theses from ABV-IIITM Gwalior and SAU New Delhi. He has also received Gold Medal at UG and PG levels.