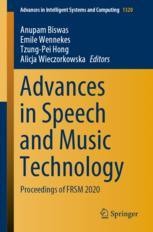 Advances in Speech and Music Technology

This book features original papers from 25th International Symposium on Frontiers of Research in Speech and Music (FRSM 2020), jointly organized by National Institute of Technology, Silchar, India, during 8–9 October 2020. The book is organized in five sections, considering both technological advancement and interdisciplinary nature of speech and music processing. The first section contains chapters covering the foundations of both vocal and instrumental music processing. The second section includes chapters related to computational techniques involved in the speech and music domain. A lot of research is being performed within the music information retrieval domain which is potentially interesting for most users of computers and the Internet. Therefore, the third section is dedicated to the chapters related to music information retrieval. The fourth section contains chapters on the brain signal analysis and human cognition or perception of speech and music. The final section consists of chapters on spoken language processing and applications of speech processing.

Dr. Anupam Biswas received his Ph.D. degree in computer science and engineering from Indian Institute of Technology (BHU), Varanasi, India, in 2017. He has received his M.Tech. and B.E. degrees in computer science and engineering from Nehru National Institute of Technology Allahabad, Prayagraj, India, in 2013, and Jorhat Engineering College, Jorhat, Assam, in 2011, respectively. He is currently working as Assistant Professor in the Department of Computer Science & Engineering, National Institute of Technology Silchar, Assam. He has published several research papers in reputed international journals, conference, and book chapters. His research interests include computational music, machine learning, fuzzy systems, information retrieval, and evolutionary computation. He has served as Program Chair of International Conference on Big Data, Machine Learning and Applications (BigDML 2019). He has served as General Chair of 25th International Symposium Frontiers of Research in Speech and Music (FRSM 2020).

Prof. Dr. Emile Wennekes is Chair Professor of Musicology at Utrecht University, The Netherlands. He was appointed full professor there in 2000. From 2006 to 2011, he was the first Head of the School of the Media and Culture Studies department. In 2017, his chair was modified from Musicology: Post-1800 Music History into Musicology: Music and Media, now also officially embracing his main field of research. Wennekes has written on a broad range of subjects, including a co-authored book on contemporary Dutch music available in six languages. His work has been published by, among others, Oxford University Press, Routledge, Michigan University Press, and Brepols. Most recently, he edited the volume Cinema Changes: Incorporation of Jazz in the Film Soundtrack (Brepols 2019) together with Dr. Emilio Audissino. Wennekes founded and chairs the Study Group Music and Media (MaM) under the auspices of the International Musicological Society. He coordinates its annual conferences.

Tzung-Pei Hong received his Ph.D. degree in computer science and information engineering from National Chiao Tung University in 1992. He was Associate Professor in Chung Hua Polytechnic Institute from 1992 to 1994 and in I-Shou University from 1994 to 1999. He served as the first director of the Library and Computer Center, Dean of Academic Affairs, Administrative Vice President, and Academic Vice President in National University of Kaohsiung. He is currently Chair Professor at the Department of Computer Science and Information Engineering. He has published more than 600 research papers in international/national journals and conferences and has planned more than fifty information systems. His current research interests include data mining, artificial intelligence, soft computing, and granular computing.

Alicja A. Wieczorkowska Ph.D., D.Sc., is a computer scientist, specializing in audio signal analysis. She holds a Ph.D. from the Gdansk University of Technology, and additionally she is the alumna of the State School of Music (Second Level). Her Ph.D. thesis examined the automatic recognition of musical instrument sounds, depending on parameterization and classifiers applied. Dr. A. Wieczorkowska is presently Associate Professor and Head of Multimedia Laboratory at the Polish-Japanese Academy of Information Technology, Warsaw, Poland. Additionally, she is also an associate member of the Graduate Faculty at the University of North Carolina at Charlotte. Her scientific interests include audio information retrieval, data mining, as well as computer graphics, multimedia, and automated identification of emotions from various signals.