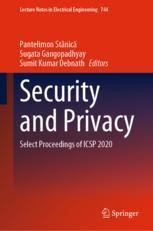 This book consists of refereed selected papers from the International Conference on Security & Privacy – ICSP 2020. The book is focused on the state-of-the-art developments of network security, secure cryptographic protocols, post-quantum cryptography, quantum cryptography, block-chain and cryptocurrency, IoT security and privacy, cloud security, machine learning in cybersecurity, and other disciplines related to security and privacy. In this book, a wide variety of basic security primitives are discussed along with recent developments in some advanced topics like functional encryption, two-party/multi-party computation, bitcoin, cryptocurrency, and post-quantum security.

Pantelimon Stanica is currently working as a Professor in the Department of Applied Mathematics, Graduate School of Engineering & Applied Sciences (GSEAS) at Naval Postgraduate School, Monterey, USA. He is also associated with the Institute of Mathematics of Romanian Academy as a researcher. He received his doctoral degree in mathematics from the State University of New York at Buffalo in 1998. He also received a doctorate in algebra from the Institute of Mathematics of the Romanian Academy in 1998. He has published over 150 research articles in internationally reputed journals and conferences and has co-authored a book on Cryptographic Boolean Functions (now in the second edition) and co-edited two conference proceedings. His research interests include number theory, cryptography, coding theory, combinatorics, finite fields, Boolean functions, valuation theory, class field theory, and theoretical computer science.

Sugata Gangopadhyay is currently working as a Professor in the Department of Computer Science, Indian Institute of Technology Roorkee, India. He received his doctoral degree in mathematics from the Indian Institute of Technology Kharagpur, India, in 1998. He received an Outstanding Teacher Award in 2016 from IIT Roorkee and ONR-Global VSP award to visit Naval Postgraduate School, Monterey, California USA. He served in the program committee of NSUCRYPTO the International Students' Olympiad in Cryptography organized by Novosibirsk State University, Russia. He has published several research articles in internationally reputed journals and conferences. His research interests include cryptology, cryptographic Boolean functions, and stream cipher cryptanalysis.