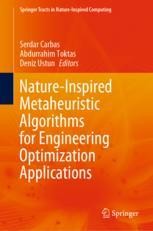 Serdar Carbas received his B.Sc. in the Department of Civil Engineering from Ataturk University, Erzurum, Turkey, and his M.Sc. and Ph.D. in the Department of Engineering Sciences from Middle East Technical University (METU), Ankara, Turkey. He was  Visiting Scholar at the University of California, Los Angeles (UCLA), CA, USA (August 2011–September 2012). His current research fields cover the use of metaheuristic optimization techniques that are found quite effective in obtaining the solution of combinatorial optimization problems which are based on natural phenomena in the field of optimum design of structures. He has authored several book chapters and published more than 40 peer-reviewed research papers. He is Associate Professor at the Department of Civil Engineering in Karamanoglu Mehmetbey University, Karaman, Turkey. Also, he is Adjunct Associate Professor at the Civil Engineering Department of KTO Karatay University, Konya, Turkey.

Abdurrahim Toktas is Associate Professor at the Department of Electrical and Electronics Engineering, Karamanoglu Mehmetbey University, Karaman, Turkey. He received B.Sc. degree in Electrical and Electronics Engineering at Gaziantep University, Gaziantep, Turkey, in July 2002. He worked as Telecom Expert from November 2003 to December 2009 for Turk Telecom Company which is the national PSTN and wideband Internet operator. He received M.Sc. and Ph.D. degrees in Electrical and Electronics Engineering at Mersin University, Mersin, Turkey, in January 2010 and July 2014, respectively. He worked as Network Expert in the Department of Information Technologies at Mersin University from December 2009 to January 2015. He is an editorial board member of the Journal of Recent Advances in Electrical & Electronic Engineering. He is the author of more than ninety research items involving articles, conference proceedings, and projects. His current research interests include electromagnetic modelling, computational electromagnetics, microstrip/printed antenna designing, radar absorber material modelling, design of MIMO antennas, design of UWB antennas, optimization algorithms, machine learnings, and surrogate model.