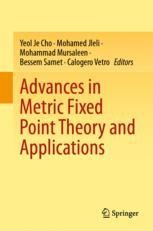 This book addresses the mathematical community working with methods and tools of nonlinear analysis. It also serves as a reference, source for examples and new approaches associated with fixed point theory and its applications for a wide audience including graduate students and researchers.

MOHAMED JLELI is Full Professor of Mathematics at King Saud University, Saudi Arabia. He received his Ph.D. in Pure Mathematics with the thesis entitled “Constant Mean Curvature Hypersurfaces” from the Faculty of Sciences of Paris VI, France, in 2004. His research interests include surfaces and hypersurfaces in space forms, mean curvature, nonlinear partial differential equations, nonlinear fractional calculus and nonlinear analysis, on which he has published his research articles in international journals of repute. He is on the editorial board member of several international journals of mathematics.

MOHAMMAD MURSALEEN is Professor at the Department of Mathematics, Aligarh Muslim University (AMU), India. He is currently Principal Investigator for a SERB Core Research Grant at the Department of Mathematics, AMU, India. He is also Visiting Professor at China Medical University, Taiwan, since January 2019. He has served as Lecturer to Full Professor at AMU since 1982 and as Chair of the Department of Mathematics from 2015 to 2018. He has published more than 350 research papers in the field of summability, sequence spaces, approximation theory, fixed point theory and measures of noncompactness and has authored/co-edited 9 books. Besides several master’s students, he has guided 21 Ph.D. students. He served as a reviewer for various international scientific journals and is on the editorial boards of many international scientific journals. He is on the list of Highly Cited Researchers for the year 2019 of Thomson Reuters (Web of Science).

BESSEM SAMET is Full Professor of Applied Mathematics at King Saud University, Saudi Arabia. He received his Ph.D. in Applied Mathematics with the thesis entitled “Topological Derivative Method for Maxwell Equations and its Applications” from Paul Sabatier University, France, in 2004. His areas of research include different branches of nonlinear analysis, including fixed point theory, partial differential equations, fractional calculus and more. He has authored/co-authored over 100 published research papers in ISI journals. He was on the list of Thomson Reuters Highly Cited Researchers for the years 2015 to 2017.

CALOGERO VETRO is Assistant Professor of Mathematical Analysis at the University of Palermo, Italy, since 2005. He is also affiliated with the Department of Mathematics and Computer Science of the university. He received his Ph.D. in Engineering of Automation and Control Systems in 2004 and the Laurea Degree in Mechanical Engineering in 2000. He has taught courses in mathematical analysis, numerical analysis, numerical calculus, geomathematics, computational mathematics, operational research and optimization. He is a member of Doctoral Collegium at the University of Palermo and acts as a referee for several scientific journals of pure and applied mathematics. He is also on the editorial boards of renowned scientific journals and a guest editor of special issues on fixed point theory and partial differential equations. His research interests include approximation, fixed point theory, functional analysis, mathematical programming, operator theory and partial differential equations. He has authored/co-authored over 150 published papers and was on the Thomson Reuters Highly Cited Researchers List from 2015 to 2017.