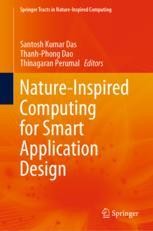 This book focuses primarily on the nature-inspired approach for designing smart applications. It includes several implementation paradigms such as design and path planning of wireless network, security mechanism and implementation for dynamic as well as static nodes, learning method of cloud computing, data exploration and management, data analysis and optimization, decision taking in conflicting environment, etc. The book fundamentally highlights the recent research advancements in the field of engineering and science.

Santosh Kumar Das received his Ph.D. degree in Computer Science and Engineering from Indian Institute of Technology (ISM), Dhanbad, India, in 2018, and completed his M.Tech. degree in Computer Science and Engineering from Maulana Abul Kalam Azad University of Technology (erstwhile WBUT), West Bengal, India, in 2013. He is currently working as Assistant Professor at the School of Computer Science and Engineering, National Institute of Science and Technology (Autonomous), Institute Park, Pallur Hills, Berhampur, Odisha, India. He has more than eight years teaching experience. He has authored/edited three books with Springer in series as Lecture Notes in Networks and Systems, Tracts in Nature-Inspired Computing, and Studies in Computational Intelligence. He has contributed more than 27 research papers. His research interests mainly focus on ad hoc & sensor network, artificial intelligence, soft computing, and mathematical modelling. His h-index is 13 with more than 480 citations.

Thanh-Phong Dao is currently Assistant Professor at the Institute for Computational Science, Ton Duc Thang University, Ho Chi Minh City, Vietnam. He received his B.S. degree in Mechanical Engineering from the Ho Chi Minh City University of Technology and Education, Vietnam, in 2008. He received his M.S. and Ph.D. degree in Mechanical Engineering from the National Kaohsiung University of Applied Sciences, Taiwan, ROC, in 2011 and 2015, respectively. His research interests include compliant mechanism, assistive technology and rehabilitation, computational intelligence, soft computing, and optimization algorithm.

Thinagaran Perumal is the recipient of 2014 Early Career Award from IEEE Consumer Electronics Society for his pioneering contribution in the field of consumer electronics. He completed his Ph.D. at Universiti Putra Malaysia, in the area of smart technology and robotics. He is currently an Associate Professor at the Department of Computer Science, Faculty of Computer Science and Information Technology, Universiti Putra Malaysia. He is also currently appointed as Chair of IEEE Consumer Electronics Society for Malaysia Chapter. His research interests are towards interoperability aspects of smart homes and Internet of things (IoT), wearable computing, and cyber-physical systems. Thinagaran is also heading the National Committee on Standardization for IoT (IEC/ISO TC / G/16) as Chairman since 2018. Some of the eminent works include proactive architecture for IoT systems; development of the cognitive IoT frameworks for smart homes; and wearable devices for rehabilitation purposes. He is an active member of IEEE Consumer Electronics Society and its Future Directions Committee on Internet of Things. He has been invited to give several keynote lectures and plenary talk on Internet of things in various institutions and organizations internationally. He has published several papers in IEEE conferences and journals and is serving as a TPC member for several reputed IEEE conferences. He is an active reviewer for IEEE Internet of Things Journal, IEEE Communication Magazine, IEEE Sensors Journal, and IEEE Transaction for Automation Science and Engineering, to name a few.