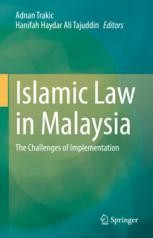 The Challenges of Implementation

This book examines the challenges of the implementation of Islamic law in Malaysia. Malaysia is a pertinent jurisdiction to explore such challenges given its global focus, colonial history and institutions, and the intersection of the Shari’ah and secularism/multiculturalism. The resultant implementation challenges are underpinned by three factors that make Malaysia an important jurisdiction for those interested in understanding the place of Islamic law in the global context.

First, Malaysia is often considered as a model Islamic country. Islamic law is a source of law in Malaysia. The Islamic law legal system in Malaysia operates in parallel with a common law legal system. The two systems of law generally are in harmony with one another. Nevertheless, occasional cross-jurisdictional issues do arise, and when they do, the Malaysian judiciary has been quite efficient in solving them. The Malaysian experience in maintaining such harmony between the two legal systems provides lessons for a number of countries facing such challenges.

Second, Malaysia has a developed Shari’ah court system that interprets and applies Islamic law predominantly based on the Shafi’i school of thought. While, for the most part, the approach has been successful, there have been times when the implementation of the law has raised concerns as to the compatibility of Islamic law with modern principles of human rights and common law-based values.

Third, there have been cases where Islamic law implementation in Malaysia has gained global attention due to the potential for wider international implications. To do justice to this complex area, the book calls on scholars and practitioners who have the necessary expertise in Islamic law and its implementation. As such, this book provides lessons and direction for other countries that operate a dual system of secular and Islamic laws.

Adnan Trakic is a Senior Lecturer in Law at the School of Business, Monash University Malaysia. His research interests cut across law, religion, and dispute resolution. Adnan has published numerous articles, book chapters and monographs.  Hanifah Haydar Ali Tajuddin is a Senior Assistant Director of the Policy and Research Division of the Syariah Judiciary Department of Malaysia. She has handled cases in the Syariah prosecution unit of the Federal Territories of Malaysia. Her research interest is in comparative criminal law and criminal justice, particularly the practice of restorative justice.