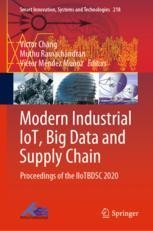 This book is a collection of selected papers presented at the First International Conference on Industrial IoT, Big Data and Supply Chain (IIoTBDSC), held as an online conference due to COVID-19 (initially to be held in Macao, Special Administration Region (SAR) of China), during September 15–17, 2020. It includes novel and innovative work from experts, practitioners, scientists and decision-makers from academia and industry. It brings multi-disciplines together on IIoT, data science, cloud computing, software engineering approaches to design, development, testing and quality of products and services.

Prof. Victor Chang is currently a Full Professor of Data Science and Information Systems at the School of Computing, Engineering and Digital Technologies, Teesside University, Middlesbrough, UK, since September 2019. He is a Research Group Leader for Artificial Intelligence and Information Systems Research Group at Teesside University. He was Senior Associate Professor, Director of Ph.D. (June 2016–May 2018) and Director of MRes (Sep 2017–Feb 2019) at International Business School Suzhou (IBSS), Xi’an Jiaotong-Liverpool University (XJTLU), Suzhou, China, between June 2016 and August 2019. He was also a very active and contributing key member at Research Institute of Big Data Analytics (RIBDA), XJTLU. He was Honorary Associate Professor at the University of Liverpool. Previously, he was Senior Lecturer at Leeds Beckett University, UK, between September 2012 and May 2016. Within 4 years, he completed Ph.D. (CS, Southampton) and PGCert (Higher Education, Fellow, Greenwich) while working for several projects at the same time. Before becoming an academic, he has achieved 97% on average in 27 IT certifications. He won a European Award on Cloud Migration in 2011, IEEE Outstanding Service Award in 2015, best papers in 2012, 2015 and 2018, the 2016 European special award and Outstanding Young Scientist 2017. He is a visiting scholar/Ph.D. examiner at several universities, Editor-in-Chief of IJOCI & OJBD journals, Former Editor of FGCS, Associate Editor of TII & Information Fusion, Founding Chair of two international workshops and Founding Conference Chair of IoTBDS and COMPLEXIS since the year 2016. He is Founding Conference Chair for FEMIB since the year 2019. He published 3 books as sole authors and Editor of 2 books on cloud computing and related technologies. He gave 22 keynotes at international conferences. He is widely regarded as one of the most active and influential young scientists and experts in IoT/Data Science/Cloud/Security/AI/IS, as he has experiences to develop 10 different services for multiple disciplines.

Dr. Muthu Ramachandran is Principle Lecturer (Associate Professor) at the School of Built Environment, Engineering and Computing at Leeds Beckett University, UK. Muthu has extensive research experience coupled with a teaching background and experiences on software and systems engineering methods & lifecycle, software development, agile software engineering, project management skills, process improvement skills, Internet technology, mobile, networks and distributed computing, real-time & embedded systems, cloud computing, service-oriented architecture and IT systems development for the past 25 years. He was a research scientist at India Space Research Labs where he worked on real-time systems development projects. Muthu is an author of two books: Software Components: Guidelines and Applications (Nova Publishers, NY, USA, 2008) and Software Security Engineering: Design and Applications (Nova Publishers, NY, USA, 2011). He is also an edited co-author of a book, Handbook of Research in Software Engineering (IGI, 2010), and has edited the book KE for SDLC (2011). He has widely authored published journal articles, book chapters and conferences materials on various advanced topics in software engineering and education. He received his master’s degree from the Indian Institute of Technology, Madras, and from Madurai Kamaraj University, Madurai, India. He is a member of various professional organizations and computer societies: IEEE, ACM, Fellow of BCS and Fellow of HEA. He was a speaker to the 5th international symposium on SOA Cloud 2012, London, COMPLEXIS 2016 and FEMIB 2019.

Prof. Víctor Méndez Muñoz is Consultant Professor at UOC, Spain. He has a background in several fields of big data, cloud computing and IoT, both in academia and in the industry. Currently, he is contributing to the IoT ecosystem for microbiological control at IUL, which is an innovative company in the biotechnology. We are building new models and architectures taking full advantage of the state-of-the-art opportunities in IoT microcomputers, microservices and edge computing, to ensure genuine progress. Furthermore, he fosters bridging the gap between theory and practice, as Collaborating Editor in scientific journals and conferences, training postgraduates at UOC and partaking in innovation programs with Universities.