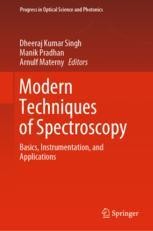 Dr. Dheeraj Kumar Singh received his Ph.D. in Physics from Banaras Hindu University (BHU), Varanasi, India in 2010. Dr. Singh was subsequently a CSIR-Nehru Post-doc at NCL Pune, NRF post doc at Seoul, South Korea, and prestigious Alexander von Humboldt (AvH) post doc Fellow in Germany. Dr. Singh was also awarded the prestigious international award of JSPS fellowship, Japan, Dr. DS Kothari Post-doc fellowship, CSIR-SRF, UGC- Meritorious fellowship (RFSMS), etc. Currently, Dr. Singh is working as Assistant Professor of Physics at IITRAM Ahmedabad. His research group is mainly focused on Frequency and time domain Spectroscopic tencinques, their developments and applications on Ionic Liquids, Biomolecules, Functionalized Nanomaterials, Molecular Interactions, etc. Moreover, he has written many Book chapter and have the patent granted by the USA. He has organized many workshops and conference on Spectroscopy of Molecules and Materials. His recent Springer Nature book as proceeding in Physics-236 on Advances in Spectroscopy: Molecules to Materials“ was published as a leading Editor. Dr. Singah has been awarded the prestegious ECR project by SERB-DST Government of India and DST-Inspire project for his PhD student. Dr. Singh has published more than 45 reserch papers in international journal of repute.
Dr. Manik Pradhan received his PhD in Chemical Physics from the group of Professor Andrew Orr-Ewing, FRS in 2008 from the University of Bristol, UK, having been awarded a prestigious Dorothy Hodgkin Fellowship. Subsequently, he moved to the University of Cambridge, UK for his postdoctoral work (2008-2010) in the group of Professor Richard Lambert after receiving the Isaac Newton Trust Postdoctoral Fellowship from Trinity College, UK. Hereafter, he came to work as a Postdoctoral Research Associate (2010-2011) in the group of Professor Richard Zare, FRS in Stanford University, USA. He also worked as a Visiting Research Assistant (2004-2005) at the Institute of Atomic and Molecular Sciences (IAMS), Academia Sinica, Taiwan. Currently he is leading many multi-disciplinary research projects as a Principal Investigator (PI) as well as a Co-Investigator. His research group focuses on the cutting-edge research in interdisciplinary areas involving experimental laser spectroscopy, biomedical and, environmental sciences along with developments of new-generation optical cavity-based laser spectroscopy techniques. Dr. Pradhan has published more than 50 research articles in international peer-reviewed journals and has several patents to his name.
Prof. Arnulf Materny recieved his Ph.D. in 1992 with distinction under the supervision of pioneer spectroscopist Prof. Wolfgang Kiefer at the University of Würzburg, Germany. Further, he was a postdoc at Caltech, Pasadena, U.S.A. There, he started to work in the field of “femtosecond spectroscopy" in the group of Nobel Laureate Prof. Ahmed H. Zewail. Currently, Prof. Materny is serving as a Full Professor of Chemical Physics at the Jacobs University, Bremen Germany. His reserach intrests cover the applications of freqencny and time domain spectroscopic techniques in various molecules and materials. Prof. Materny has received several awards, including Kekule Fellowship and the Hoechst Prize for his Ph.D. work, a Faculty Award by the JMU and the Heisenberg Fellowship by the DFG for his postdoc research. More than 16 PhDs and 15 post doc reserachers including many Humboldt fellow succesfully completed his project under his guidance. He has completed many DFG projects at Jacobs University, Germany. He is the member of several Editorial board including Journal of Raman Spectroscopy. Prof. Materny has published more than 250 articles in international journals of repute.