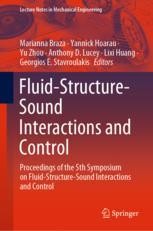 This book contains a thorough and unique record of recent advances in the important scientific fields fluid–structure interaction, acoustics and control of priority interest in the academic community and also in an industrial context regarding new engineering designs. It updates advances in these fields by presenting state-of-the-art developments and achievements since the previous Book published by Springer in 2018 after the 4th FSSIC Symposium.

This book is unique within the related literature investigating advances in these fields because it addresses them in a complementary way and thereby enhances cross-fertilization between them, whereas other books treat these fields separately.

Dr. Marianna Braza is First-Class Director of Research CNRS (DR1) at the Institut de Mécanique des Fluides de Toulouse (IMFT), Unité Mixte de Recherche N° 5502 CNRS–INPT–UT3. She leads the Morphing platform for the wings of the future www.smartwing.org in collaboration with AIRBUS “Emerging Technologies and Concepts Toulouse” and a multidisciplinary team regrouping the activities of six research institutes in this topic. She is the coordinator of the H2020 European research project N° 723402 SMS, “Smart Morphing and Sensing for aeronautical configurations,”www.smartwing.org/SMS/EU. She co-edited four volumes in Springer Series and chaired three IUTAM Symposia up to now. She is Associate Editor in the Journal Fluids and Structures.

Yannick Hoarau is Aeronautical Engineer (ENSICA, Toulouse, France) who obtained his Ph.D. on the numerical simulation of unsteady turbulent flow in 2002 in Toulouse, France. He was appointed as Assistant Professor in fluid mechanics in 2005 in the faculty of physics and engineering of the University of Strasbourg and affected to the IMFS laboratory (which became the ICube laboratory in 2013). He became Associate Professor in 2011 and Full Professor in 2015 at the University of Strasbourg. Currently, he is the head of the mechanics department of the Icube laboratory, one of the four departments of the laboratory with 95 permanent researchers, 70 Ph.D. students and 20 postdoc within four teams. Since 2019, he is also Deputy Vice-President for research of the University of Strasbourg working on Research Data and Open Science. His fields of expertise are: computational fluid dynamics, high-performance computing, unsteady turbulence modeling, shock waves–boundary layer interactions, fluid–structure interactions, particle deposition, two-phase flow and icing modeling.

Dr. Yu Zhou completed his Ph.D. degree at The University of Newcastle in 1993. He joined The Hong Kong Polytechnic University in 1995 and rolled through the ranks of Assistant, Associate and Full Professor. Since 2013, he has been Full Professor and Director of the Institute of Turbulence-Noise-Vibration Interaction and Control at the Harbin Institute of Technology (Shenzhen). His main research interests are experimental studies of turbulent flows (wakes, jets, boundary layers, complex flows), flow-induced vibrations and active flow control. He has published over 180 archival journal papers. His work has received more than 3300 ISI citations. In 2003, he received the VSJ best paper award medal from the Visualization Society of Japan. He was the recipient of the prestigious Chinese national “1000 Talent Scheme” award in 2010 and was Distinguished Visiting Scientist in 2014–2015 in the fluids group of the CSIRO Materials Science and Engineering division (Melbourne). He was elected to be Fellow of Australasian Fluid Mechanics Society in 2014 and serves as Associate Editor of AIAA Journal.

Dr. A.(Tony) D. Lucey is John Curtin Distinguished Professor of Mechanical Engineering and twice Former Dean of Engineering at Curtin University, Australia. His research interests lie in the field of fluid–structure interaction in the context of classical aero–hydro-elasticity, boundary-layer stability and biomechanics. Additionally, he conducts research in the area of engineering education. He is the current President of the Australasian Fluid Mechanics Society and has twice (2012–2014 and 2019) been a member of the College of Experts of the Australian Research Council.

Dr. Lixi Huang received his Ph.D. in biomechanics and acoustics at Cambridge University in 1992. Before that, he studied aerospace engineering at Beijing University of Aeronautics and Astronautics. He was elected as Junior Fellow at Peterhouse, Cambridge, before he joined The Hong Kong Polytechnic University in 1996 as Assistant then Associate Professor. He then moved to The University of Hong Kong where he is now Professor at the department of mechanical engineering. He was one of the founding members of the HKU Zhejiang Institute of Research and Innovation and is Director of its lab for aerodynamics and acoustics. His research interest includes fluid–structure interaction and application in human respiration, aero-engine acoustics and environmental noise control. He serves as Subject Editor for Journal of Sound and Vibration, Associate Editor for the Journal of the Acoustical Society of America and an editorial board member for the Chinese Journal of Acoustics.

Prof. Georgios E. Stavroulakis studies problems of non-smooth mechanics and optimization, smart structures and applications of soft computing in engineering. His results have been documented in several monographs and edited volumes, including seven titles published by Springer, and in more than 200 journal papers. He has served as President of the Greek Association of Computational Mechanics, and he is currently President of the Hellenic Society of Theoretical and Applied Mechanics and actively participates in the work of IUTAM.