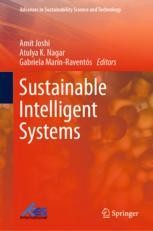 This book discusses issues related to ICT, intelligent systems, data science, AI, machine learning, sustainable development and overall their impacts on sustainability. It provides an overview of the technologies of future. The book also discusses novel intelligent algorithms and their applications to move from a data-centric world to sustainable world. It includes research paradigms on sustainable development goals and societal impacts. The book provides an overview of cutting-edge techniques toward sustainability and ideas to help researchers who want to understand the challenges and opportunities of using smart management perspective for sustainable society. It serves as a reference to wide ranges of readers from computer science, data analysts, AI technocrats and management researchers.

Amit Joshi is currently Director of Global Knowledge Research Foundation and also Entrepreneur Researcher who has completed his masters and research in the areas of cloud computing and cryptography in medical imaging. Dr. Joshi has an experience of around 10 years in academic and industry in prestigious organizations. Dr. Joshi is an active member of ACM, IEEE, CSI, AMIE, IACSIT, Singapore, IDES, ACEEE, NPA and many other professional societies. Currently, Dr. Joshi is International Chair of InterYIT at International Federation of Information Processing (IFIP, Austria). He has presented and published more than 50 papers in national and international journals/conferences of IEEE and ACM. Dr. Joshi has also edited more than 40 books which are published by Springer, ACM and other reputed publishers. Dr. Joshi has also organized more than 50 national and international conferences and programs in association with ACM, Springer and IEEE to name a few across different countries including India, UK, Europe, USA, Canada, Thailand, Egypt and many more.

Atulya K. Nagar holds Foundation Chair as Professor of Mathematical Sciences and is Pro-Vice-Chancellor for Research and Dean of the Faculty of Science at Liverpool Hope University, UK. He is also Head of the School of Mathematics, Computer Science and Engineering, which he established at the University. He is an internationally respected scholar working at the cutting edge of theoretical computer science, applied mathematical analysis, operations research and systems engineering. He received a prestigious Commonwealth Fellowship to pursue his doctorate (D.Phil.) in Applied Nonlinear Mathematics, which he earned from the University of York (UK) in 1996. He holds a B.Sc. (Hons.), an M.Sc. and M.Phil. (with distinction) in Mathematical Physics from the MDS University of Ajmer, India. His research expertise spans both applied mathematics and computational methods for nonlinear, complex and intractable problems arising in science, engineering and industry.

GABRIELA MARÍN-RAVENTÓS received a M.Sc. in Computer Science from Case Western Reserve University in 1985 and a Ph.D. in Business Analysis and Research from Texas A&M University, USA, in 1993. She has been a Computer Science faculty member at Universidad de Costa Rica (UCR) since 1980. She was Dean of Graduate Studies and Director of the Research Center for Communication and Information Technologies (CITIC), both at UCR. Currently, she is Director of the Graduate Program in Computer Science and Informatics. She has organized several international and national conferences, and has been, and actually is, Chair of several program and editorial committees. From 2012 to 2016, she was President of the Latin American Center for Computer Studies (CLEI), becoming the first woman to occupy such a distinguished position. Since September 2016, she is Vice-President of the International Federation for Information Processing (IFIP), in charge of the Digital Equity Committee. Her research interests include smart cities, human–computer interaction, decision support systems, gender in IT and digital equity.