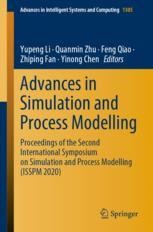 Advances in Simulation and Process Modelling

This book gathers the selected papers from the Second International Symposium on Simulation and Process Modelling (ISSPM 2020), which was held online on August 29-30, 2020, due to COVID-19 pandemic. The Symposium provides a forum in virtual presentation for scholars, researchers and practitioners who are interested in the modelling and simulation of business processes, production and industrial processes, service and administrative processes, and public sector processes to develop theory and practice of simulation and process modelling.

Yupeng Li is Vice President of Shenyang Jianzhu University (SJZU), Shenyang, China. She received her B.E. and M.E. degrees in Civil Engineering from Chongqing University, Chongqing, China, in 1998 and 2001, respectively, and received her M.S. and Ph.D. degrees in Engineering and Applied Science from Washington University in St. Louis, MO, USA, in 2005. She worked at Intel Corporation, AZ, USA, for about 7 years, at Shenyang Tooling Machine Group, Shenyang, China, for about 2 years, and worked at Liaoning Energy & Investment Group, China, for about 4 years. Since August 2018, Prof. Li has been in Shenyang Jianzhu University as Professor and Vice President. Prof. Li focuses on the research of reliability in integrated circuits. Prof. Li was appointed the title of "National Special Expert" in 2016, awarded the special allowance of State Council in 2018, and nominated into the list of high-level outstanding talents in Shenyang in 2019. Prof. Li has published 20+ peer-reviewed technical papers in international journals and conferences, and obtained 9 patents.
Quanmin Zhu is Professor in Control Systems at the Department of Engineering Design and Mathematics, the University of the West of England, Bristol, UK. He obtained his M.S. degree in Harbin Institute of Technology, China, in 1983, and Ph.D. degree in Faculty of Engineering, University of Warwick, UK, in 1989. His main research interest is in the area of nonlinear system modelling, identification, and control. He has published over 250 papers on these topics, edited various books with Springer, Elsevier, and the other publishers, and provided consultancy to various industries. Currently, Professor Zhu is acting as Editor of International Journal of Modelling, Identification and Control, Editor of International Journal of Computer Applications in Technology, Academic Editor of Complex, Hindawi, a member of various journal editorial boards, and Editor of Elsevier book series of Emerging Methodologies and Applications in Modelling, Identification and Control. He is Founder and President of a series annual International Conference on Modelling, Identification and Control.

Feng Qiao received his B.Eng. degree in Electrical Engineering and M.S.E. degree in Systems Engineering from the Northeastern University, Shenyang, China, in 1982 and 1987, respectively; and his Ph.D. degree in Intelligent Modelling and Control from the University of the West of England, Bristol, UK, in 2005. During the period between 1987 and 2001, he worked at the Automation Research Institute of Metallurgical Industry, Beijing, China, as a Senior Engineer in Electrical and Computer Engineering. He is currently a Professor at the Faculty of Information and Control Engineering, Shenyang Jianzhu University (SJZU), Shenyang, China. His research interests include modelling and simulation, multi-objective decision making, optimization, signal processing, and management information system. Currently, Professor Qiao Prof. Qiao is acting as Editor-in-Chief of the International Journal of Simulation and Process Modelling, and a member of the editorial board of the International Journal of Modelling, Identification and Control, and he serves on many international conferences as IPC and OPC members. Zhiping Fan received his B.S. and M.Eng. degrees in Industrial Automation from Northeastern University (NEU), Shenyang, China, in 1982 and 1985, respectively, and the Ph.D. degree in Automatic Control from NUE in 1996. Since June 1998, Zhiping Fan has been a Professor in the School of Business Administration, NEU. Prof. Fan focuses on the research of Management Science and Engineering. His recent research interests include: decision analysis, operation management, electronic commerce, etc. He was awarded Chang Jiang Scholar in 2013, and he was a Recipient of the National Science Fund for Distinguished Young Scholars in 2005. Prof. Fan has published 120 peer-reviewed technical papers in international journals. He is a member of the Expert Assessment Group of the Ministry of Management Science and a standing member of the Society for Chinese Management Modernization.
Yinong Chen received his Ph.D. degree from the Karlsruhe Institute of Technology (KIT), Germany, in 1993. He did postdoctoral research at KIT and at LAAS-CNRS, France. From 1994 to 2000, he was a faculty member at Wits University at Johannesburg, South Africa. Dr. Chen joined Arizona State University, USA, in 2001, and now, he is Principal Lecturer and Director of IoT/Robotics Education Lab. Dr. Chen’s primary research interests are in service-oriented computing, Robot as a Serve, Internet of Things, and computer science education. He (co-) authored a dozen books and over 200 technical papers in these areas. Dr. Chen is the Editor-in-Chief of Artificial Intelligence and Technology, an associate editor of the International Journal of Simulation and Process Modelling (IJSPM), an area editor of the Elsevier journal Simulation Modeling Practice and Theory, and an editorial board member of the Journal of Systems & Software (JSS) and the CAAI Transactions on Intelligence Technology.