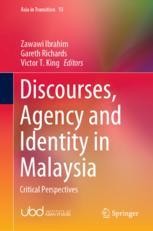 Discourses, Agency and Identity in Malaysia

This book seeks to break new ground, both empirically and conceptually, in examining discourses of identity formation and the agency of critical social practices in Malaysia. Taking an inclusive cultural studies perspective, it questions the ideological narrative of ‘race’ and ‘ethnicity’ that dominates explanations of conflicts and cleavages in the Malaysian context. The contributions are organised in three broad themes. ‘Identities in Contestation: Borders, Complexities and Hybridities’ takes a range of empirical studies—literary translation, religion, gender, ethnicity, indigeneity and sexual orientation—to break down preconceived notions of fixed identities. This then opens up an examination of ‘Identities and Movements: Agency and Alternative Discourses’, in which contributors deal with counter-hegemonic social movements—of anti-racism, young people, environmentalism and independent publishing—that explicitly seek to open up greater critical, democratic space within the Malaysian polity. The third section, ‘Identities and Narratives: Culture and the Media’, then provides a close textual reading of some exemplars of new cultural and media practices found in oral testimonies, popular music, film, radio programming and storytelling who have consciously created bodies of work that question the dominant national narrative. This book is a valuable interdisciplinary work for advanced students and researchers interested in representations of identity and nationhood in Malaysia, and for those with wider interests in the fields of critical cultural studies and discourse analysis.

“Here is a fresh, startling book to aid the task of unbinding the straitjackets of ‘Malay’, ‘Chinese’ and ‘Indian’, with which colonialism bound Malaysia’s plural inheritance, and on which the postcolonial state continues to rely. In it, a panoply of unlikely identities—Bajau liminality, Kelabit philosophy, Islamic feminism, refugee hybridity and more—finds expression and offers hope for liberation”.

“This book shakes the foundations of race thinking in Malaysian studies by expanding the range of cases, perspectives and outcomes of identity. It offers students of Malaysia an examination of identity and agency that is expansive, critical and engaging, and its interdisciplinary depth brings Malaysian studies into conversation with scholarship across the world”.

“This is a much-needed work that helps us to take apart the colonial inherited categories of race which informed the notion of the plural society, the idea of plurality without multiculturalism. It complicates the picture of identity by bringing in religion, gender, indigeneity and sexual orientation, and helps us to imagine what a truly multiculturalist Malaysia might look like”.

Zawawi Ibrahim is currently a visiting professor at Taylor’s University, Malaysia. His was most recently Professor of Sociology and Anthropology at Universiti Brunei Darussalam. Working within the field of anthropology broadly understood, his wide-ranging research interests include youth, popular culture, storytelling and narratives, religious diversity and multiculturalism. He is the author of The Malay labourer (1995), and co-editor of Human insecurities in Southeast Asia (2016) and Borneo studies in history, society and culture (2017). He is a member of the EU-funded research project ‘Radicalisation, Secularism and the Governance of Religion: Bringing together European and Asian Perspectives’ (2019–2021).
Gareth Richards is a writer, editor and bookseller based in Malaysia. He previously taught at Manchester University, the University of the Philippines and Universiti Malaya. He is the director of the editorial company Impress Creative and Editorial, the owner of Gerakbudaya Bookshop, Penang, and co-founded the arts space Hikayat. He is the co-author/editor of Asia–Europe interregionalism: Critical perspectives (1999), the writer of the texts for two books of photography: Portraits of Penang: Little India (2011) and Panicrama (2016) as well as numerous articles on film, dance, literature and music. He is currently writing a book on the artist Ch’ng Kiah Kiean.
Victor T. King is Professor of Borneo Studies, Universiti Brunei Darussalam, and Emeritus Professor in the School of Languages, Cultures and Societies, University of Leeds. He has long-standing interests in the sociology and anthropology of Southeast Asia. His recent publications are UNESCO in Southeast Asia: World Heritage Sites in comparative perspective (ed., 2016), and co-edited books on Human insecurities in Southeast Asia (2016), Borneo studies in history, society and culture (2017), Tourism and ethnodevelopment (2018), Tourism in East and Southeast Asia (2018, 4-volume reader), and Tourism in South-East Asia (2019).