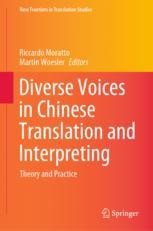 This book presents a thoughtful and thorough account of diverse studies on Chinese translation and interpreting (TI). It introduces readers to a plurality of scholarly voices focusing on different aspects of Chinese TI from an interdisciplinary and international perspective.

The book brings together eighteen essays by scholars at different stages of their careers with different relationships to translation and interpreting studies. Readers will approach Chinese TI studies from different standpoints, namely socio-historical, literary, policy-related, interpreting, and contemporary translation practice.

Given its focus, the book benefits researchers and students who are interested in a global scholarly approach to Chinese TI. The book offers a unique window on topical issues in Chinese TI theory and practice.

It is hoped that this book encourages a multilateral, dynamic, and international approach in a scholarly discussion where, more often than not, approaches tend to get dichotomized. This book aims at bringing together international leading scholars with the same passion, that is delving into the theoretical and practical aspects of Chinese TI.

Dr. Riccardo Moratto 莫冉, nom de plume 韋佳德 (韦佳德 in simplified Chinese characters), is a scholar of Translation and Interpreting Studies. He is an expert member (专家会员) of the Translators Association of China (TAC, 中国翻译协会). He is the author of Introduzione alla sinografia, Taiwan Sign Language Interpreting: Theoretical Aspects and Pragmatic Issues, two books in Chinese, and the chief editor of several other academic volumes. He has published widely in the fields of Translation and Interpreting Studies, Taiwan sign language, Chinese studies, Chinese language, and Chinese literature. In 2013, he obtained his Ph.D. from National Taiwan Normal University (NTNU). Over the years, he has taught at several universities including Hunan Normal University, Fujen Catholic University, Taipei National University of the Arts, Shih Chien University, National Taiwan University of Science and Technology, and National Taipei University of Business. He is a professional interpreter and a literary translator. His most recent work focuses on Chinese contemporary literature, interpreting history in China, translation and cultural identities, public service interpreting, media interpreting, and the interdisciplinary nature of interpreting studies.

Dr. Martin Woesler is Xiaoxiang Scholar Distinguished Professor of Chinese Studies as well as Jean Monnet Chair of EU Studies at Hunan Normal University. As Director of the “International Chinese Studies Centre”, he conducts teaching and research on Comparative Literature and Translation Studies. He is also Research Associate with Witten/Herdecke University, Germany, and President of the World Association for Chinese Studies as well as the German China Association. He is a literary translator and has translated Lu Xun, Ba Jin, Qian Zhongshu, Wang Meng, Han Shaogong, Han Han, and many other Chinese authors into German and English. He also co-translated the first full translation of the Dream of the Red Chamber into German. In his research, he compares Chinese and German novels and looks at early exchanges, translation, and reception between China and Europe. Woesler works as an interpreter with the languages Chinese, English, German, and French. He conducts research projects in the field of digitization, including machine translation.