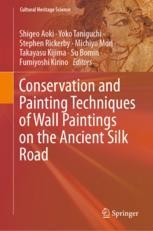 This book presents recent research on ancient Silk Road wall paintings, providing an up-to-date analysis of their coloring materials and techniques, and of developments in efforts to preserve them.

The destruction of the Bamiyan Buddhas in 2001 encouraged international collaboration between conservation research institutes to study and protect the Silk Road’s painted heritage. The collaborations led to exciting new discoveries of the rich materials used in wall painting, including diverse pigments and colorants, and various types of organic binding media. In addition, comparative research across the region revealed shared painting practices that indicate the sophisticated exchange of technologies and ideas. In parallel with these advances in technical understanding, greater awareness and sensitivity has been fostered in endeavors to preserve this fragile heritage.

The book offers insights obtained from conservation projects and ongoing research, that encompass the geographical regions and periods related to the Silk Road, including from Japan, China, Korea, India and Afghanistan, and countries of the Eastern Mediterranean region. It also discusses the current issues and future challenges in the field. Featuring concise chapters, the book is a valuable resource for students and professionals in the field of cultural heritage preservation, as well as those who are not familiar with the fascinating topic of Silk Road wall painting research.

Shigeo Aoki is Visiting Professor at Tokyo University of the Arts. His work focuses on conservation of the wall paintings of ruins. He received his B.A. in Archaeology from Kokugakuin University in 1972. He was honored with the Dunhuang Award from Gansu Province in China in 2005, the Academic Award from the Japan Society for the Conservation of Cultural Property in 2012, and the Order of the Sacred Treasure, Gold Rays with Rosette in 2017.

Yoko Taniguchi is Associate Professor at the University of Tsukuba. She mainly works on painting techniques for wall paintings such as Cappadocia, Ajanta, Bamiyan, Dunhuang Caves and Kizil Caves. She graduated from the Graduate School of Conservation Science, Tokyo National University of Fine Arts and Music in 1998.

Stephen Rickerby is a wall painting conservator and works on wall painting projects around the globe. He received his M.A. in Art History from the University of Aberdeen in 1984 and his Postgraduate Diploma in Conservation of Wall Paintings from the Courtauld Institute of Art, (University of London) in 1988.

Michiyo Mori is Project Researcher on Buddhist wall paintings at Tokyo University of the Arts. Her work focuses on wall paintings on the Silk Road in the context of art history. She received her master’s degree for her work on Buddhist art in Central Asia from Waseda University in 2001. She has also studied Buddhist Archaeology in Graduate School of Archaeology and Museology, Peking University between 2003-2005.

Takayasu Kijima is Professor at Tokyo University of the Arts and is known as Icon, Oil Painting and Wall Painting Conservator. He graduated from Sokei Academy of Fine Art in 1977. He served as Project Leader of the international conservation project for collecting and restoring Bamiyan wall paintings and contributed to the development of new restoration technology.

Su Bomin is Deputy Director at the Dunhuang Academy in China. His work focuses on wall painting conservation. He received his Doctor in Chemistry from Lanzhou University in 2003. He was Director of the Conservation Institute of Dunhuang Academy.

Fumiyoshi Kirino is Professor at Tokyo University of the Arts. His work focuses on conservation science and material chemistry, particularly pigment analysis of wall paintings in Dunhuang and Kizil Caves using X-ray fluorescence and diffraction analyses. He received his master’s degree from Tokyo Institute of Technology in 1981.