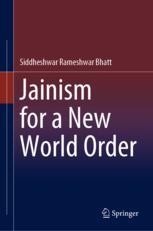 Jainism for a New World Order

This book analyses global issues holistically and offers pragmatic solutions from a Jainism perspective. Accordingly, it presents a fresh vision of individual development, social transformation and cosmic wellbeing based on the central tenets and practices of Jainism. Through this book, readers learn viable solutions to the current problems of environmental disharmony, economical distress, and religious and cultural conflicts. It deals with religious pluralism and brings to fore the need for harmony of religions and interfaith dialogues. The book is interesting for people from varied walks of life who are looking forward to a world that is established in peace, harmony and wellness. It is of immense value and interest for people from all walks of life to the Jain community to revisit the basic tenets propounded in classical literature.

Siddheshwar Rameshwar Bhatt is an eminent philosopher and Sanskritist. Presently, he is a National Fellow of Indian Council of Social Science Research, Government of India. He is also an Ex-Chairman, Indian Council of Philosophical Research and Chairman of Indian Philosophical Congress and Asian Congress of Philosophy. He retired as Professor and Head, Department of Philosophy, University of Delhi, Delhi. He is internationally known as an authority on ancient Indian culture, Buddhism, Jainism and Vedanta. His research areas include Indian philosophy, logic, epistemology, ethics, value theory, philosophy of education, philosophy of religion, comparative religion, social and political thought, etc. He has lectured in many universities and research institutes of the USA, Canada, Finland, Trinidad, North Korea, South Korea, Japan, China, Vietnam, Sri Lanka, Singapore and Thailand. He is a member of many national and international associations. He is a member of Board of Advisors of Council for Research in Values and Philosophy, Washington D.C., USA, which has brought out 300 volumes on world cultures and civilizations.