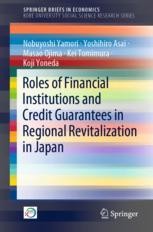 Masao Ojima is a researcher at the Research Institute for Economics & Business Administration, Kobe University. He teaches at Himeji Dokkyo University. His hometown is Osaka, in Osaka Prefecture, and he graduated from Osaka City University in 1975. He received an MA degree in 2015 and a PhD in economics in 2018 at Kobe University. Before becoming a researcher at Kobe University in 2018, he had a career at a city bank and a steel company. His professional field is regional finance and regional financial institutions. He has published academic articles in journals, such as the Journal of Household Economics, and in the RIEB Discussion Paper Series.

Koji Yoneda is Assistant Professor of the Faculty of Economics, Kumamoto Gakuen University. He received a PhD in economics from Nagoya University in 2009. Before becoming Assistant Professor of Kumamoto Gakuen University in 2015, he worked at the Economic Research Center, School of Economics, Nagoya University. He also worked at the Research Institute for Economics and Business Administration, Kobe University, as a part-time lecturer from 2015 to 2018. He has published academic articles in journals such as Applied Economics Letters, Empirical Economics Letters, and the Japanese Journal of Labour Studies. His research interests include the labor market for new graduates, personnel management in financial institutions, and efficiency analysis of public hospitals.​
Show all