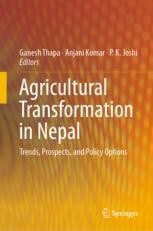 This book addresses some key strategic questions related to agriculture in the context of major contemporary developments and emerging challenges in Nepal such as the changing role of agriculture with economic growth, structural transformation in reducing poverty, improving nutritional outcomes, and addressing the challenges of climate change. The book also suggests policy measures to improve the delivery of critical inputs and services and ensure the participation of marginal and smallholders in high-value chains. Further, it discusses how the new federal system and governance structure will affect the delivery of agricultural technology and services.   The book is divided into five parts. Part I discusses macro-issues in the agriculture sector, while Part II focuses on agricultural productivity growth and its main drivers. The third part explores diversification in the agricultural and non-agricultural sectors by farmers and other rural people for livelihood improvement, while the fourth part deals with agricultural trade and marketing issues, highlighting policy implications and recommendations in the areas of immediate focus and further research. Lastly, Part V addresses institutions and governance issues, which are vital for agricultural development. In the final chapter, the editors summarize and synthesize the book’s main findings and develop a policy agenda for addressing the many challenges faced by the agriculture sector in Nepal, so as to make it more productive, competitive, sustainable, and inclusive. The book offers a rich source of analytical information on various aspects of agricultural development in Nepal and will be of immense value to policymakers, development partners, civil society, students, and those interested in the economic and agricultural development of not only Nepal, but also other developing countries.