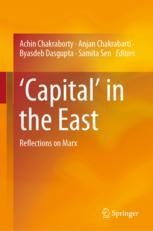 ‘Capital’ in the East

This book pursues a Marxist approach with an emphasis on class to reflect on Marx’s Capital in the context of the East. It critically reassesses some of the familiar concepts in Capital and teases out issues that are at its periphery. In various essays, it explores this borderland to promote new concepts and modes of analysing Marx’s treatise in the twenty-first century. Accordingly, it represents an advance in Marxian theory and politics.

Examining Marx’s Capital from the perspective and location of the East, the book focuses on many issues that are at the ‘borders’ of Capital, which is concerned principally on unpacking developed capitalism. New concepts are introduced and set in relation to those championed by Marx in order to advance our understanding of economy, capitalism, development and politics. In this regard, the book offers a reading of Capital that is distinct from conventional reflections on it in the Western world.

The scope is vast, covering much of the territory in Marx's Capital, as well as addressing a few new issues connected to Capital. The content is divided into the following sections: Reception of Capital in the East; Value, Commodity, Surplus Value and Capitalism; Population and Rent in Capital; and Issues Beyond Capital.

Professor Achin Chakraborty is a Professor of Economics and Director of the Institute of Development Studies Kolkata (IDSK) in India, specializing in welfare economics, development economics, political economy and methodology of social science. He previously served on the faculty of the Centre for Development Studies in Kerala. Chakraborty obtained his Ph.D. in Economics from the University of California at Riverside, USA. He has published widely in journals such as Economic Theory, Social Indicators Research, Journal of Quantitative Economics, Environment and Development Economics, Economic and Political Weekly. He has co-edited with Anthony D’Costa the recently published book The Land Question in India: State, Dispossession and Capitalist Transition (OUP, 2017).

Professor Anjan Chakrabarti is a Professor at the Economics Department, University of Calcutta. His research interests are in political economy, development economics, Indian economics and political philosophy. He has published widely in international and national journals and has six books to his credit, including most recently The Indian Economy in Transition: Globalisation, Capitalism and Development (with Anup Dhar and Byasdeb Dasgupta) from Cambridge University Press, 2015. He was awarded the V.K.R.V. Rao National Award in 2009.

Professor Byasdeb Dasgupta, a Professor of Economics, received his Ph.D. in Economics from the Centre for Economic Studies and Planning, Jawaharlal Nehru University. He joined the University of Kalyani in 1998 and became a Professor of Economics there in 2012. He has published articles in academic journals and edited books on issues pertaining to political economy of labour, international economics, gender studies and political economy of finance and development. He has visited various institutes/universities in France and China and has participated in many national and international conferences on issues pertaining to political economy and labour.

Professor Samita Sen served as First Vice Chancellor, Diamond Harbour Women’s University, from 2013 to 2015. She was Dean of the Faculty of Interdisciplinary Studies at Jadavpur University until 2018.  Her monograph on women’s employment in the jute industry in colonial Bengal was published in 1999 and won the Trevor Reese Prize in Commonwealth History. She is currently working on women’s migration in relation to tea and overseas plantations. Her various research publications address issues such as education, the women’s movement, marriage, domestic violence, domestic workers, women in governance and women’s land rights. Her recent publications include the jointly written Domestic Days (OUP, 2016) and Passage to Bondage (Stree 2016). She was a member of the Governing Body of the Mahanirban Calcutta Research Group, General Secretary to the Indian Association of Women’s Studies and a member of the Association of Indian Labour Historians.
Show all