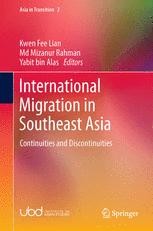 This book is a collection of work by migration scholars and researchers who are actively conducting fieldwork in Southeast Asia. It presents a wide variety of current research and approaches the field of international labor migration from a regional perspective, acknowledging that the migration process goes beyond local and national boundaries and is embedded in regional and global interconnections. The chapters capture the complexity and richness of the migration phenomenon and experience, which manifests itself in a multitude of ways in a region well known for its diversity. The collection highlights the continuities and discontinuities in the linkages that have been forged through the movement of people between sending and receiving societies. Such linkages are explained by distinguishing between migration that has been sustained by a colonial past and migration that has been precipitated by globalization in the last two decades. The diversity of issues in the region covered by this volume will encourage a rethink of some of the conventional views of migration scholarship and result in a more critical reflection of how we approach migration research.

Prof Lian Kwen Fee was formerly Head of the Department of Sociology in the National University of Singapore before taking up an appointment in the Institute of Asian Studies as Professor of Sociology. His academic background is in political and historical sociology. His research interests are in race, migration, and the nation-state focusing on New Zealand, Malaysia and Singapore. His recent publications are on migrant entrepreneurship in colonial Malaysia, migrant remittances in Asia, migration entrepreneurship in Korea and Japan and race and politics in Peninsular Malaysia. He is currently editing a book on ‘Multiculturalism, Migration and the Politics of Identity in Singapore' and co-authoring a monograph on the urbanization of Malaya and Indian migrants in Klang (Malaysia).

Dr Md Mizanur Rahman is a Senior Research Fellow, at the Institute of South Asian Studies, National University of Singapore. He was a Postdoctoral Fellow at the Asia Research Institute, National University of Singapore, from 2005 to 2007, and a Research Fellow at the Department of Sociology, NUS, from 2007 to 2010. He was a visiting scholar at the Department of Sociology, University of Western Ontario, Canada and Graduate School of Policy Science, Ritsumeikan University, Kyoto, Japan. His recent books include Diaspora Engagement and Development in South Asia (co-edited) and Asian Migration Policy: South, Southeast and East Asia (co-edited). His research articles have appeared in leading migration and population journals such as International Migration, Population, Space and Place, Journal of International Migration and Integration, Journal of Ethnic and Migration Studies, Asian and Pacific Migration Journal, Asia Europe Journal, and Asian Population Studies.

Dr Yabit Alas is the Director of the Continuing Education Centre. He was formerly the Head of the Malay Language and Linguistics, Director

of the Language Centre and Dean of the Faculty of Arts and Social Sciences, all at Universiti Brunei Darussalam. His area of expertise is in Comparative Linguistics specifically on the Austronesian Languages. His special interest is the Dusunic Languages spoken in north Borneo. His research is on the origin, dispersal and classification of the Dusunic languages. He is also actively conducting research on Malay languages especially Standard Malay and it relevance to globalisation. He has published a number of articles on the Malay language both in local and regional journals and was the co-editor of the ‘Reflections in Borneo Rivers: Essays in Honour of Professor James T. Collins: Book I' and ‘Reflections in Southeast Asian Seas, Essays in Honour of Professor James T. Collins: Book II.’ He currently leads the newly setup Borneo Studies Network (BSN) at the Institute of Asian Studies, whose interest is to promote and enhance research on Borneo through links with various research centres in Borneo.
Show all