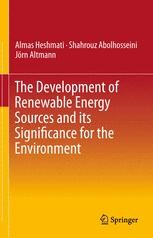 This book analyzes the effects of power generated by renewable energy sources, renewable energy production technologies, energy efficiency, and market regulation of carbon emissions. It elaborates on how these parameters have direct and indirect effects on carbon emission reduction, such as the results of an environmental tax that could directly reduce carbon emissions by decreasing fossil fuel consumption or by stimulating energy savings through technological innovation, as well as how renewable energy sources can affect both economic growth and the environment. In addition to a detailed analysis of the interrelationships between renewable energy consumption, production technology, and market regulation, The Development of Renewable Energy Sources and its Significance for the Environment proposes a model for measuring the effectiveness and results of the interaction between these links. Furthermore, a structure for a marketplace of renewable energy sources is put forward, as well as an outline of the requirements that must be met in order for this market to function. Suitable policy recommendations to enhance the market for renewable energies are also provided.

Almas Heshmati is Professor of Economics at Jönköping University and Sogang University. He held similar positions at the Korea University, Seoul National University, University of Kurdistan Hawler, RATIO Institute (Sweden), and the MTT Agrifood Research (Finland). He was Research Fellow at the World Institute for Development Economics Research (WIDER), the United Nations University during 2001–2004. From 1998 to 2001, he was Associate Professor of Economics at the Stockholm School of Economics. He has a PhD degree from the University of Gothenburg (1994), where he held a Senior Researcher position until 1998. His research interests include applied microeconomics, globalization, development strategy, efficiency, productivity, and growth with application to manufacturing and services. In addition to more than 100 scientific journal articles, he has published books on the EU Lisbon Process, global inequality, East Asian manufacturing, the Chinese economy, technology transfer, information technology, water resources, landmines, power generation, development economics, economic growth, and world values.

Shahrouz Abolhosseini has a PhD degree in Technology Management (2014) from Seoul National University. Prior to his doctoral studies, he served as a crude oil marketing expert (2004–2007) and petroleum products marketing expert (2007–2010) at the National Iranian Oil Company. Previously he worked as an oil and gas market analyst (2001) and project financial coordinator (2001–2004) at Petropars Limited Company. He held a number of other research-related positions during the period 1995–2000 at the Institute for International Energy Studies, Economic and Finance Affairs Ministry, and Parliament Research Center. His research interests include energy economics and policy, and renewable and non-renewable energy sources.

Jörn Altmann is Professor for Technology Management, Economics, and Policy at the College of Engineering of Seoul National University. Prior to this, he taught at the University of California at Berkeley, worked as a Senior Scientist at Hewlett-Packard Labs, and has been a postdoc at EECS and ICSI of UC Berkeley. During that time, he worked on international research projects about pricing of Internet services. Dr. Altmann received his B.Sc., his M.Sc. (1993), and his Ph.D. (1996) from the University of Erlangen-Nürnberg, Germany. Dr. Altmann's current research centres on the economics of Internet services and Internet infrastructures that integrate economic models. In particular, he focuses on the analyses of network topologies, networked businesses, and resource allocation schemes. On these topics of research, he has publications in major conferences and journals, serves on editorial bodies of journals (Electronic Markets, Electronic Commerce Research Journal), is involved in many conference program committees, and has been an invited speaker to several conferences. He also served on several European, US American, and other national panels for evaluating research proposals on networks and emerging technologies. Currently, he chairs the International Conference on Economics on Grids, Clouds, Systems, and Services, GECON.