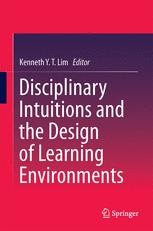 Disciplinary Intuitions and the Design of Learning Environments

The preceding example was from the natural sciences, but one could just have easily taken an example from, say, the environmental sciences or from the social sciences. Indeed, much of this book does just that, as it seeks to chart the territory of a new theory of learning around Disciplinary Intuitions.

Many of the chapters within draw frequent and explicit linkages to curriculum design, from the premise of the need to go beyond addressing the conceptions of learners, to seeking to understand the substrate upon which these conceptions are founded. The argument is made that this substrate comprises the particular set of lived experiences of each learner, and how – because these lived experiences are as tacit as they are diverse – designing curriculum around misconceptions and preconceptions alone would not lead to enduring understanding from first principles. From this perspective, Disciplinary Intuitions constitute an exciting field at the nexus of learning theories and curriculum design.

Kenneth Y. T. Lim is a Research Scientist at the National Institute of Education, Nanyang Technological University, Singapore. Prior to his appointment, he taught geography and social studies in several schools and junior colleges in Singapore, as well as served as a Curriculum Designer in the Ministry of Education. He received his Masters in Technology-in-Education from Harvard and built on this during his doctoral research on adolescent spatial cognition. Kenneth’s present research interests lie in maker movements and the affordances for learning of fictive worlds and virtual environments, for which he has developed the Six Learnings curriculum framework. As a theory of learning, Disciplinary Intuitions undergirds his work in maker movements and in immersive environments.